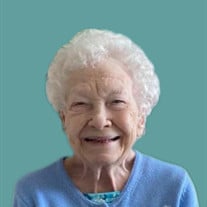 Alice Martin, age 94, of Lubbock, TX entered the presence of her Lord and Savior on August 1, 2021 at her home. Alice was born April 12, 1927 in Madelia, MN to Ole and Marie (Gustafson) Nelson. She married Jim Houchin of Kansas City, MO in 1947. He preceded her in death in 1984. Alice married Jim Martin of Millersburg, IN in 1988. He preceded her in death in 2015. Alice was loved by all who knew her. First, and foremost, she loved Jesus Christ, her family, and her church. Alice was a garment weaver by trade. She owned her own garment reweaving business, Georgie Anne Weavers, in downtown Minneapolis, MN for many years. In her later years she enthusiastically volunteered at the World Missionary Press, New Paris, IN. Any activity at her church was a delight for her. Following her retirement and move to Indiana from Minnesota, Alice and her husband, Jim, who had also retired, traveled extensively throughout the United States and had more fun than teenagers. They were a gift to each other from God after their first spouses had died. Alice's family and friends always looked forward to gatherings on the farm in Indiana with a lot of delicious home-cooked meals. She loved everybody and will be greatly missed! Alice is survived by her 3 daughters, Carol Daniels-Walker of St. Louis, MO; Rosemary Patterson and husband Doyle of Lubbock, TX; Denise Orensteen and husband, Michael of Lakeville, MN; daughter-in-law, Connie Houchin of Bloomington, MN; 2 stepsons, Don Martin and wife Dee of South Bend, IN; Robb Martin and wife Paula of Uniontown, OH; and stepdaughter, Jan Martin of Indianapolis, IN. She is also survived by 16 grandchildren, 4 step-grandchildren, 29 great-grandchildren, and 10 step-great grandchildren. Alice is also survived by her brother, Alvin (Bud) Nelson of Naperville, IL and numerous nieces and nephews. Alice is preceded in death by her parents, one sister, and four brothers. She is also preceded in death by her beloved son, Donald Richard Houchin. Alice will be buried next to her husband, Jim Houchin, at Oak Hill Cemetery, Minneapolis, MN. A ZOOM Memorial will be held at a later date in Bloomington, MN. Memorial contributions may be directed to World Missionary Press, 19168 CR 146, New Paris, IN 46553 or Hospice of the South Plains, 4413 82nd St., Ste. 135, Lubbock, TX 79424.

Alice Martin, age 94, of Lubbock, TX entered the presence of her Lord and Savior on August 1, 2021 at her home. Alice was born April 12, 1927 in Madelia, MN to Ole and Marie (Gustafson) Nelson. She married Jim Houchin of Kansas City, MO in... View Obituary & Service Information

The family of Alice Viola Martin created this Life Tributes page to make it easy to share your memories.

Alice Martin, age 94, of Lubbock, TX entered the presence of...

Send flowers to the Martin family.