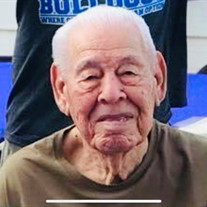 Amado Molina, Sr, 88, of Lubbock, Texas went to be with the Lord on September 7, 2021. Amado was born September 14, 1932 in San Antonio, Texas to Alberto Molina and Ramona Molina. Amado moved to Arizona where he was raised until moving back to Lubbock at the age of 13. Amado lived between Lubbock and Arizona for years until him and his wife Christina eventually settled down in Lubbock. Amado and Christina were married for 68 years and had a very large happy family together. Amado worked for the City of Lubbock and then found a new opportunity at Precision Drilling where he worked for 22 years. Working there he got to travel around a lot and enjoy one of his two favorite meals of fish or chicken (same thing every time). Amado enjoyed fishing with his kids in his free time and dancing the night away with his lovely wife on occasion. Amado Molina is preceded in death by his father and mother Alberto & Ramona Molina. Sisters; Fina Villa, and Lydia Carillo. Brothers; Juan Molina, Alvino Molina, Alberto Molina, Ernesto Molina, and Raymundo Molina. And his daughters Linda Molina and Olvido Molina and Adelita Molina. He is survived by his wife of 68 years Christina Molina and his 8 sons; Amado Molina Jr., Salvador Molina (Rosa), Sammy Molina (Stella), Johnny Molina, George Molina (Hortencia), Alfonso Molina (Lisa), Chris Molina (Adela), Jacob Molina. And his 2 daughters; Ernestina Castilleja (Raul), Adela Molina (Chris). Amado also had 23 grandchildren and 57 great grandchildren and 8 great, great grandchildren and counting. Amado is also survived by his sister Lupe Martinez. The Rosary will be held at Sanders Funeral Home in the Sanders Memorial Chapel on Monday, September 13, 2021 7:00- 7:45 PM and visitation will continue until around 8:30 PM. The funeral service will also be held at Sanders Memorial Chapel on Tuesday, September 14, 2021, at 2:00 PM. Graveside services will follow in Peaceful Gardens Memorial Park. Pallbearers include Sammy Molina Jr., Amado Molina III, Salvador Molina Jr., Nicholas Molina, Jeromy Molina, and Issac Molina. Honorary pallbearers include Joshua Molina, Raul Castilleja Jr., and Christian (Amado) Molina. Please celebrate the life of Amado by visiting www.sandersfuneralhome.com. A webcast of services will be available as well as our online guest book. Masks will be mandated if you plan to attend the service, please be mindful of the family's request.

Amado Molina, Sr, 88, of Lubbock, Texas went to be with the Lord on September 7, 2021. Amado was born September 14, 1932 in San Antonio, Texas to Alberto Molina and Ramona Molina. Amado moved to Arizona where he was raised until moving back... View Obituary & Service Information

The family of Amado Molina, Sr. created this Life Tributes page to make it easy to share your memories.

Send flowers to the Molina family.