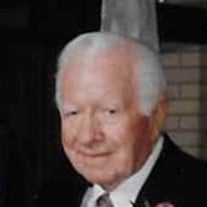 ARVEL KENNETH HAGGARD Arvel Kenneth Haggard beloved husband, father, grandfather and great-grandfather went to be with his Lord and Savior on October 24, 2020. Arvel Haggard was born May 24, 1925 in Canute, Oklahoma, to Dennis and Ruth Haggard. In 1942, he graduated from Canute High School at the age of sixteen. Arvel met the love of his life, Nell (Stout) Haggard, the following year. They were married on December 21, 1944. They were truly a remarkable couple and were married for 70 years. In the early years of their marriage, they lived in Canute where he worked on the family farm. In 1958, Arvel and Nell moved to Lubbock. They worked side by side in their business, Haggard Distributors for over 40 years. Arvel loved to tell stories, laugh, drink black coffee (every day) and watch sports. He especially loved the Texas Tech Red Raiders. He was happiest when watching his grandkids play sports and never missed a game. Arvel was a long-time member of First Baptist Church. He was very charismatic, he never met a stranger and was known for his generous heart. He was preceded in death by his beloved wife. He is survived by his son and daughter-in-law, Jerry and Joy Haggard of Lubbock, daughter, Kathy McCurry of Lubbock; four grandchildren, Honey (Haggard) Segrist and husband Scott of Lubbock, Jason Haggard of Lubbock, Kymberly (McCurry) Sims and husband Charlie of Keller, Lance McCurry and wife Kasey of Ft. Worth; eight great-grandchildren, Hannah, Halli and Scotlyn Segrist, Carson and Connor Sims, Alexis and Jackson McCurry and Grayson Pahanish; brother, Elton Haggard of Irving and brother-in-law, Joe Stout and his wife Kathy of Columbus, Ohio. A private family memorial graveside service will be held in Lubbock. In lieu of flowers, please consider donating to Meals on Wheels.

ARVEL KENNETH HAGGARD Arvel Kenneth Haggard beloved husband, father, grandfather and great-grandfather went to be with his Lord and Savior on October 24, 2020. Arvel Haggard was born May 24, 1925 in Canute, Oklahoma, to Dennis and Ruth Haggard.... View Obituary & Service Information

The family of Arvel Kenneth Haggard created this Life Tributes page to make it easy to share your memories.

Send flowers to the Haggard family.