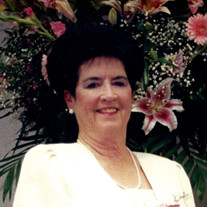 Betty Mitchell Armstrong, 86, of Lubbock passed away March 17th. The family will receive friends at Sanders Funeral Home, 2-4pm on Sunday, March 21st. Services will be held Monday March 22nd, 10:30am, Southside Church of Christ. Betty was born August 9, 1934 to Lester and Modell Mitchell in Lamesa, Tx. She grew up in Mississippi and Texas. She was the first head cheerleader at J T Hutchinson Jr High, Lubbock, in 1948. Betty was an avid golfer, serving as President once of the Lubbock Women's Auxiliary Golf Club, and watched golf consistently on TV in later years. She became a Real Estate Agent after her children had grown and moved from home. also managing numerous rental homes that she had purchased. Betty was known "For doing it herself ", putting in a bathroom tile floor the day before knee replacement! Betty is survived by her children, Deb (Bill) Mills, Brenda (Tom) Lehman, Dennis (Karen) Benton, Brad (Kim) Benton, one grandson Austin (Tiarra) Benton, one sister in law, Patsy Guillot, and numerous nieces and nephews. She is preceded in death by her husband, Cecil, her parents, and siblings. Memorials can be made to Southside Church of Christ, 8501 Quaker, Lubbock, Tx, 79424.

The family of Betty Ann Armstrong created this Life Tributes page to make it easy to share your memories.

Send flowers to the Armstrong family.