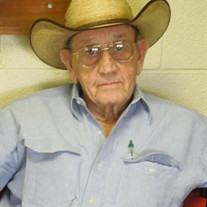 Singing cowboy, cotton farmer, proud veteran, and retired truck driver Billy Gene Reed's love of life didn't come to an end with his death. Billy passed away peacefully on September 15, 2021, surrounded by family members who will continue to honor his legacy by living their lives to the fullest just as he did. Billy was born on November 22, 1929, in Flomot, Texas, to Vina (Day) and Jake Reed. He lived a long and prosperous life and loved his family well. Billy was a veteran who served during the Korean War as a Naval Aircrew Chief in California. After serving in the military, Billy and his beloved wife Vivian of 55 years built a home, farm, and family estate in Lubbock where extended family and friends gathered often for delicious meals, music, and wonderful memories. Billy enjoyed traveling and would often boast that he had driven over 4 million miles without a speeding ticket or accident. His career was that of a semi-truck driver, and when he retired, he and Vivian would travel to see family members and vacation spots nationwide. Billy was the father of four children. Despite his time on the road away from his family, Billy always provided support and love for his children and grandchildren - no matter where they were located. In his later years, Billy and his precious wife Aggie of 5 years, planned occasions and extensive travel time to provide opportunities to visit with their extended family. Billy is survived by his children, Donna and Dwayne Farrar, Wayne Hodges, Leslie and Lesa Reed, Carla Roberts, and 10 bonus children with Aggie; brother, Ronnie and Alice Reed, 11 grandchildren, 24 great grandchildren, and 2 great, great grandchildren. Billy has too many cousins, nephews, and nieces to count. He is preceded in death by his parents (Jake and Vina Reed), spouses (Vivian Puryear and Agnes Wilson), siblings (Edward Reed, Bobbie Wilson, and Sandra Tucker Wimberly), and daughter (Glenda Jo Hodges). His viewing will be Friday, September 24, 6-8 pm at Sanders Funeral Home. Billy will be honored in a celebration of life on September 25, 2021, at 10 am at Sanders Funeral Home, 1420 Main Street, Lubbock, TX.

The family of Billy Gene Reed created this Life Tributes page to make it easy to share your memories.

Send flowers to the Reed family.