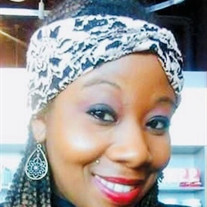 Brandi D'Ann Green was born on April 27th, 1987. She was the second and final child born to Shirley A. Green and the (late) Avance Green. At an early age she was baptized and became a member of Parkway Church of Christ. Brandi attended Haynes Elementary, where she was a member of the Odyssey of the Mind - Gifted and Talented Program throughout her entire time as an elementary student. Brandi then attended Irons Junior High where she was a member of the volleyball team, basketball team, the Jr. National Honor Society, and treasurer for student council. Brandi was involved in various programs outside of her schoolwork, including being an active member in the National League of Junior Cotillions, Jack and Jill, Inc., Monterey Cheerleading Camp, Coronado Summer Track, and the Arthur Ashe NAJTL (National Association of the Junior Tennis League). Brandi was featured in a Darvin Ham commercial while in Junior high. She attended Coronado Sr. High school where she was a member of the National Honor Society, United States Academic Decathlon Program and not only competed on a national level but placed and won national competitions. Brandi ran track and played volleyball for Coronado. She was the 2nd runner up for the Coronado Mustang Mascot and was on the homecoming court her senior year where she was escorted by her late father, Avance Green. Brandi graduated in the top 10% of her senior class from Coronado in 2005 as a high honor graduate with a cumulative grade point average above 4.0 and college credits. Brandi then attended Texas Tech University for two years as a pre-med major and had ambitions to complete her studies with a concentration in animal science. Brandi always wanted to help others which led her to work in the medical health field where she was a certified (CNA & CMA). She was heavily involved in various community service programs and organizations such as the Lubbock Roots Arts Historical Council and The NETwork, which is an AT&T Employee Resource Group. Brandi enjoyed travelling, and she really loved attending live concerts. She rarely met a stranger and will be missed by everyone who knew and loved her. Brandi is survived by her mother, Shirley A. Green and her sister, Jo Avis D. Green, Sherell and Rey Thomas (God Parents), a host of aunts, uncles and cousins and her dog, Renata. Brandi is preceded in death by her father, Avance Green and her grandparents on both sides as well as a host of uncles, aunts, cousins and her beloved Pitbull, Jeeva.

Brandi D'Ann Green was born on April 27th, 1987. She was the second and final child born to Shirley A. Green and the (late) Avance Green. At an early age she was baptized and became a member of Parkway Church of Christ. Brandi attended Haynes... View Obituary & Service Information

The family of Brandi D'Ann Green created this Life Tributes page to make it easy to share your memories.

Send flowers to the Green family.