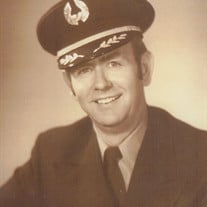 Captain Murry Thomas Lusk "Tom" Lusk, 83, of Lubbock Texas passed away on January 5, 2022 surrounded in love by his family. Tom was born on August 23, 1938 in Lubbock, Texas and was preceded in death by his parents Murry Lawrence Lusk and Mary Oweida Winsett Lusk of Oklahoma. Survivors inlude his wife, La Verne Barksdale Lusk, one son Thomas Lynn Lusk and one daughter Debbie L. Wisdom and grandchildren Amy Lynne Lusk (Mrs. John Carbo), Valane Adam Lusk, Scott Thomas Lusk, Jennifer and Haley Robertson. Great grandchildren include Camryn Lynne and Caleb James Bjork, and Cade Clyde Carbo. Jack Carbo extended family. Tom attended Lubbock High School in 1956 during the Buddy Holly era, Tom graduated from Texas Tech University with a degree in Marketing. While in College he was active in flying. Following graduation, Tom embarked on an Aviation career that would span over 45 years as a pilot with Trans Texas Airways, Texas International Airlines, Continental Airlines and United Airlines. Tom traveled extensively pursuing his interest and hobbies. Tom was a supporter of the Proud Birdman at Continental Airlines, and a member of the Airline Pilots Association (ALPA) for over 50 years. Tom was a proud member of several heritage organizations including the Texas Tech Chapter of the National Society Sons of the American Revolution, his patriot ancestor was Hugh Lusk, who fought in the battle of Kings Mountain, Battle of Cowpars and the Battle of Guilford Courthouse. Beyond the S.A.R., Tom held leadership roles in both the York Rite and Scottish Rite Masonic Orders as well as the Lubbock Chapter 76 Order of the Easter Star. Tom will be missed for his sense of family, tradition and spirit. In Lieu of Flowers, the Family has requested donations be made to The Knights Templar Eye Foundation 3201 Cross Timbers 1700 Rd Bldg 4 Ste 300, Flower Mound, TX 75028. HIGH FLIGHT Oh! I have slipped the surly bonds of Earth And danced the skies on laughter-silvered wings; Sunward I've climbed, and joined the tumbling mirth Of sun-split clouds, - and done a hundred things You have not dreamed of - wheeled and soared and swung High in the sunlit silence. Hov'ring there, I've chased the shouting wind along, and flung My eager craft through footless halls of air... Up, up the long, delirious burning blue I've topped the wind-swept heights with easy grace Where never lark, or ever eagle flew - And, while with silent, lifting mind I've trod The high untrespassed sanctity of space, Put out my hand, and touched the face of God. John G. Magee, Jr.

Captain Murry Thomas Lusk "Tom" Lusk, 83, of Lubbock Texas passed away on January 5, 2022 surrounded in love by his family. Tom was born on August 23, 1938 in Lubbock, Texas and was preceded in death by his parents Murry Lawrence Lusk and... View Obituary & Service Information

The family of Captain Murry Thomas Lusk (Tom Lusk) created this Life Tributes page to make it easy to share your memories.