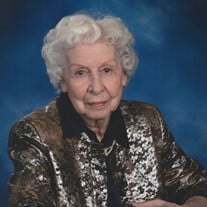 Charlene A. Gilbert Wulfekamp departed this life on October 26, 2021, in Lubbock, Texas. She was the widow of Bernard C. Wulfekamp, who died in 1975, in Cincinnati, Ohio. Charlene was born September 28, 1918, in Gallatin County (Warsaw), KY, to Lena G. & Robert E. Gilbert, the second of five children. She married Bernard (Bernie) C. Wulfekamp on June 14, 1940, in Warsaw, KY, in her family home. They resided in Cincinnati for 35 years, during which time their two daughters were born (Barbara G. and Beryl A.). In 1998, after 58 years in Cincinnati, OH, Charlene, moved to Lubbock, TX, to be closer to family. After high school, Charlene, nannied in New York City. In later years she was employed by Federated Department Stores in Cincinnati, working in Mr. Lazarus' administration. She and Bernie enjoyed traveling and his love for baseball rubbed off on her, as she was a huge fan of the Cincinnati Reds and later the Texas Rangers. Charlene was an avid reader and always up to date on current affairs. Besides reading, cooking was her most enjoyable hobby. She had a wide variety collection of cookbooks. She was a supporter of the Music Ministry at FUMC-Lubbock. She enjoyed attending the Lubbock Symphony Orchestra performances and Texas Tech Women's basketball games, too. Charlene was a faithful member of FUMC-Lubbock, where she was a member of the Friendship Sunday School Class and Rebecca Circle. She was installed into the Nancy Anderson Chapter of the Daughters of the American Revolution in 2007. For ten years she was a volunteer at Heartline Ministry of Trinity Church. Charlene also was a member of a MEET & GREET lunch group which began as a "grandmother's Study Club." However, they mostly enjoyed monthly outings for lunch together. She lived independently in her own home and then apartment up until 2020 at the age of 102 and was very proud of the fact. She lived out her remaining months in Assisted Living facilities in Lubbock with Calvert Home Health & Hospice Care. In addition to her husband, her first daughter, Barbara, preceded her in death in 2002. Two sisters and one brother preceded her in death: Christine G. Williams, of Lexington, KY, and Dorothy P. Jacobs of Forest Park, GA. (both 75) Clarence A. "Bub" Gilbert, Oklahoma City, OK. (98). Charlene is survived by one brother: Robert L. Gilbert of Bothell, WA, daughter, Beryl Waddell, Lubbock, TX, two granddaughters: Bethany (Mike) Beeghly, of Frisco, TX, and Jennifer (Lee Bob) Harper, of Gruver, TX, and four great-grandchildren: Leo, Max, and Natalie Harper and Brandon Beeghly. Her remains will be interred at St. John's Westminster Union Church cemetery in Cincinnati, OH, next to her husband and daughter, in mid November. A memorial reception for Charlene will be held in December at First United Methodist Church-Lubbock.

Charlene A. Gilbert Wulfekamp departed this life on October 26, 2021, in Lubbock, Texas. She was the widow of Bernard C. Wulfekamp, who died in 1975, in Cincinnati, Ohio. Charlene was born September 28, 1918, in Gallatin County (Warsaw),... View Obituary & Service Information

The family of Charlene Wulfekamp created this Life Tributes page to make it easy to share your memories.

Charlene A. Gilbert Wulfekamp departed this life on October 26,...

Send flowers to the Wulfekamp family.