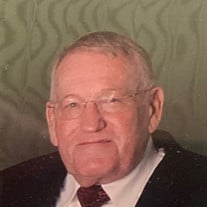 A celebration of the life will be held graveside for Charles Maynard Baker, 93, of Wilson, Texas on Tuesday, June 22, 2021 at 11:00 am at Green Memorial Park in Wilson, Texas. Pastor Billy Palmer of First Baptist Church in Wilson will be officiating the service along with military honors. Charles was born June 6, 1927 in Wilson to BW and Celia Baker. He graduated from Wilson High School and received his Bachelor's Degree from Hardin-Simmons University in Abilene, Texas. He served in the U.S. Naval Cadets during World War II, where he trained in California and received his flight instruction as a pilot. Upon graduation he returned to the Wilson area where he farmed and ranched. On February 10, 1951 he married Wanda Jean, in a double wedding ceremony with Jean's identical twin sister June and his cousin Lawrence. Charles and Jean were married 70 years. During the mid 60's, the family relocated to Phoenix AZ to continue farming. The family joined North Phoenix Baptist Church where they established life long friendships and he taught bible study in the young marrieds and singles departments. He also served as a Deacon during their time at NPHX. In the early 70's, the family relocated to Glenns Ferry, Idaho to farm for Ore-Ida. Later he returned to Wilson to pursue his love of cotton farming. Even though Charles faced some physical challenges, he never let it stand in the way of serving, helping and giving of himself to others. He was known to be a strong, loving, determined, and dedicated husband, father and friend. Charles is survived by loved ones including daughter Carolyn Sawyer (L.E.); son Steve Baker; son Stan Baker (Debbi); grandchildren John Charles Euston (Luri), Brad Baker (Kailey), and Lauren Polan (Alex). 4 great-grand children Lillian, Lucy, Owen, and Hazel. He is also survived by his sister Wanda Meador in Lubbock, Tx. Memories and condolences may be shared with the family at www.sandersfuneralhome.com. in lieu of flowers, donations can be made in Charlie's honor to the First Baptist Church of Wilson Texas.

A celebration of the life will be held graveside for Charles Maynard Baker, 93, of Wilson, Texas on Tuesday, June 22, 2021 at 11:00 am at Green Memorial Park in Wilson, Texas. Pastor Billy Palmer of First Baptist Church in Wilson will be officiating... View Obituary & Service Information

The family of Charles Maynard Baker created this Life Tributes page to make it easy to share your memories.

A celebration of the life will be held graveside for Charles...

Send flowers to the Baker family.