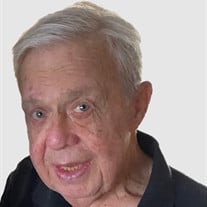 Services for Charles Westley Barnes, 84, of Lubbock will be 10:30 a.m., Wednesday, February 23, 2022, in Sanders Memorial Chapel. A committal service with military honors will be 11:00 a.m., Friday, February 25, 2022, at the City of Levelland Cemetery. Please celebrate the life of Charles by visiting www.sandersfuneralhome.com. Charles went to be with our Lord and Savior on February 12, 2022. Charles was born January 8, 1938 in Bakersfield, CA to George Ferguson Barnes and Willie Mae Alford. Charles married JoAnn Harrington on April 17, 1971, where he was a member of Trinity Church-Lubbock, Texas and served in the military for a quarter-century. MSgt Charles W. Barnes served in the U.S. Air Force from March of 1961 - September of 1986. While in the service, he served 2 tours in Thailand and 1 tour in Turkey with each tour lasting one year. He also served stateside in California, Louisiana, Illinois, Texas, Mississippi, and Alabama. While in the Air Force, Charles received an Air Force Commendation Medal with 2 Oak Leaf Clusters, an Air Force Good Conduct Medal with 7 Oak Leaf Clusters, a Small Arms Expert Marksmanship, an Air Force Longevity Service Award with 4 Oak Leaf Clusters, a National Defense Service Medal, Vietnam Service Medal, Air Force Outstanding Unit Award with 2 Oak Leaf Clusters, a Republic of Vietnam Campaign Medal, he was Honor Graduate in Administration, Honor Graduate in Postal School, Community College of the Air Force (CCAF) in Administration Degree, Community College of the Air Force (CCAF) as an Aircraft Mechanic, and Associate of an Arts Degree at South Plains College. After retirement, he worked in government for the Post Office and the Small Business Administration. Following his government work, he became a car mechanic on the side and completed barber college which led him to opening a barber shop in Levelland, Texas. Finally, he retired in 1996 and decided to stay retired to focus on being a father, mentor, coach and husband. He enjoys football, fishing, family, and is a strong believer in Jesus Christ. He loved life, Kern River, and was an avid follower of Christ. Loved ones include his sons, David Barnes and wife, Jennifer; son, Jonathan Barnes and wife, Chandra; son; Charles Barnes Jr. and wife, Donna; grandsons; Matthew, Joshua and Jacob Barnes; granddaughter, Presley Barnes; brothers, Darrel Barnes and wife, Paula and Steve Barnes and wife, Tara; sisters, Lucille Nieto, Darlene Bonham and husband, Jack and Georgette Friehauf and husband, Calvin. Preceded in death by his parents, his wife, Jo Ann. He was a devoted Christian, husband, and father. Charles truly loved life, his family and lived "righteously." Later, he became a true disciple of God. He was the center of his family and will be truly missed. God blessed this "True Soul", and overall "True Grit!"

The family of Charles Westley Barnes created this Life Tributes page to make it easy to share your memories.

Send flowers to the Barnes family.