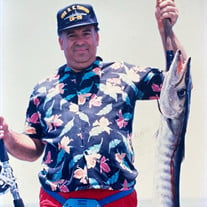 Charles Lloyd Tatum, 74, of Lubbock passed away from COVID-19 at University Medical Center on December 23, 2020. Lloyd was born on April 8, 1946 in Shamrock, Texas to Thelma Lloyd Kesler Tatum and William Rayfield “Ray” Tatum and later grew up in Lubbock. Lloyd met his wife of 55 years, Willie Ruth White, in Lubbock. After attending Texas Tech University, he worked for nearly his entire career with General Motors Corporation. As a car buff, he was fortunate to work in an industry that was both his vocation and his avocation. His job took him and his family to 5 continents until he finally settled back in Lubbock for retirement in 1994 after a posting in Dubai, U.A.E. When his daughters would come to visit in Lubbock, he could always be found outside cleaning the car engine or ensuring that all of the windows were completely spotless before they got back on the road. He was equally fastidious about his yard. Indeed, one could drive down his street in the dead of winter and his lawn would be a striking green, tidy rectangle in an otherwise endless stretch of ragged beige. A staunch “Reagan Republican,” Lloyd proudly placed a Trump yard sign in his front yard and never missed an opportunity to blame Democrats for any personal misfortune or perceived societal malady. He often engaged his daughters in spirited political discussions in recent years. Other than his family, his greatest lifelong loves were always dogs, most recently Mayda and Mike. His daily wardrobe in retirement consisted almost entirely of Bermuda shorts paired with T-shirts sporting a large picture of a Boxer and a logo such as “Boxer Dad.” You could always find him late at night in the living room watching classic films from the 1940s and 1950s (or even Buffy the Vampire Slayer) with his dog Mayda at his feet and occasionally some ice cream that his wife had hidden from him far back in the freezer. His mother, father, and brother, Ronald Hugh Tatum, preceded him in death. He is survived by his wife, Willie Ruth (White) Tatum, his three daughters – Tootie Tatum and grand-dogs Moose, Phoenix and Rocky of Concord, CA, Lela Tatum-Mintz and grand-dogs Addie Mae and Lu Magoo of Raleigh, NC, and Lynn Tatum and grand-dogs Lady Larry and Roger of Los Angeles, CA. In lieu of flowers, the family suggests donations to Austin Boxer Rescue (https://austinboxerrescue.com/). Memorial services will be announced at a later date.

The family of Charles Lloyd Tatum created this Life Tributes page to make it easy to share your memories.

Charles Lloyd Tatum, 74, of Lubbock passed away from COVID-19...

Send flowers to the Tatum family.