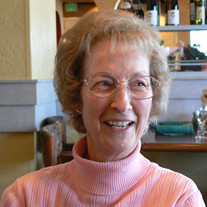 Charlotte Janiece Eubank Brown, age 79, of Arvada, Colorado passed away Saturday, December 12, 2020. Janiece was born January 15, 1941 to Perry and Charline (Woodward) Eubank in Idalou, Texas, where she spent her years growing up. She attended Abilene Christian College, earning a degree in Elementary Education. After graduating, she married Jodie Eugene Brown of Dalhart, Texas, and relocated to Denver for the love of the outdoors in 1968. Janiece began a teaching career that lasted more than thirty years. She was passionate about children and was gifted in the way she could teach young people to have a passion for reading.She enjoyed spending time with her friends, working in her flower garden, traveling and attending classic car shows with her husband. She strongly believed in the love of God and was a dedicated member of the Church of Christ. A graveside burial service will be held in Idalou, Texas for Janiece on Friday, December 18, 2020 for immediate family. Janiece is survived by her loving husband of over 57 years, Jodie Eugene Brown, of Arvada, Colorado; son Joel Brown (Leslie) of Seattle, Washington; daughter Julie Brown Dutch of Commerce City, Colorado; brother Kelly Eubank (Beverly) of Lubbock, Texas; sister Marge Hopper (Norman) of Colleyville, Texas; sister-in-law JoAnn Eubank of Waxahachie, Texas; brother Les Eubank (Sharon) of Lubbock, Texas; grandchildren Andrew Dutch, Kendall Brown, and Cameron Brown; eight nieces and nephews, and numerous great nieces and nephews. She was preceded in death by her parents and brother Keith Eubank. In lieu of flowers, the family requests contributions to be made in Janiece’s memory to the March of Dimes, https://www.marchofdimes.org/giving, an organization she supported.

The family of Charlotte Janiece Brown created this Life Tributes page to make it easy to share your memories.

Send flowers to the Brown family.