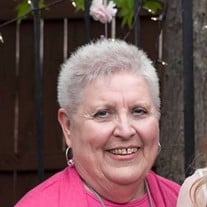 A celebration of the life of Charlotte Madigan, 78, of Lubbock, Texas will be held at 9:00 AM Saturday, November 21, 2020 in Peaceful Gardens Memorial Park with Reverend Jim Brown officiating the graveside service. Please celebrate the life of Charlotte by visiting https://www.sandersfuneralhome.com/obituaries/Charlotte-Madigan/. A video of the service will be available as well as the online guest book. The family would be honored for you to share your memories, photos and tributes to Charlotte via this webpage. Charlotte passed away November 15, 2020. She was born November 11, 1942 in Tipton, OK to Earl and Thelma Box. She graduated from Monterey High School and attended Texas Tech University. Charlotte married Richard Madigan on April 27, 1968. They were stationed across the US while Richard served as a helicopter pilot and officer in the United States Air Force. Charlotte served as the military wife and raised two daughters. Lt. Col. Richard Madigan passed away on May 24, 1985. Charlotte and the girls moved back to Lubbock in 1986. She called Lubbock home as she continued to raise her daughters and serve in multiple volunteer positions through the band programs in Evans Junior High and Monterey Band. When the grandkids arrived, she took on the role of spoiling them and coordinating Camp Mimi every summer. Loved ones include daughter and son in law, Shelby and Rich Renton; daughter and son in law, Brandy and Eryn Cuiskelly; grandsons, Kyle and Luke Renton; brother and sister in law, Hugh and Jodie Box; brother and sister in law, Steve and Lola Box; sister in law, Kath Madigan, brother in law and wife, Tim and Wendie Madigan, brother in law and wife, Bob and Peggy Madigan, sister in law, Joan Madigan, brother in law, Terry Madigan and several cousins, nieces and nephews. Meeting her at the gates of heaven and preceding her in death, her husband, Richard Madigan, her parents, Earl and Thelma Box, and her granddaughter, Paige Madigan Renton. In lieu of flowers, the family requests that all memorial contributions be made to the American Heart Association through this link https://www2.heart.org/site/SPageNavigator/donatenow_legacy.html&s_src=20U2W1EEMM&sub_src=main_nav_memorial_link

A celebration of the life of Charlotte Madigan, 78, of Lubbock, Texas will be held at 9:00 AM Saturday, November 21, 2020 in Peaceful Gardens Memorial Park with Reverend Jim Brown officiating the graveside service. Please celebrate the life... View Obituary & Service Information

The family of Charlotte Ruth Madigan created this Life Tributes page to make it easy to share your memories.

A celebration of the life of Charlotte Madigan, 78, of Lubbock,...

Send flowers to the Madigan family.