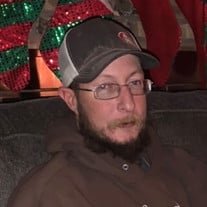 Christopher Johnson of Lubbock TX was called home by our Lord and Savior on January 19th 2021 at the mere age of 36. Christopher was born in Midland TX on January 18th 1985 to Larry and Catherine Johnson. His family moved to Buffalo Springs Lake in 1996 where he went to school in Slaton TX. He graduated from Slaton High School in 2003. After high school he went into the construction business. He was a heavy equipment operator for DPR McHam for many years. Christopher was a devoted Son, Brother, and Uncle. There was nothing he wouldn’t do for his mother for whom he cherished. Christopher loved to be outside; wether he was fishing, hunting, doing yard work, working on his truck or just drinking a beer with friends, if he was outside he was happy. When he wasn’t doing these things he was happiest wrestling and playing with his 3 nephews or playing with his beloved dog Zeus. Christopher was a very giving man, always ready to help whoever asked. Christopher had numerous best friends whom he called “his brothers” that he spent a lot of time with just being guys. He will be deeply missed by his friends, family, and all who knew him; but most of all by his mother and sister whom love him more than words can express. Christopher is survived by his mother Catherine Johnson of Lubbock, his sister Kami Johnson of Lubbock and his 3 nephews-Tyler, Jaithan, and Liam Frausto also of Lubbock. He is preceded in death by his father Larry Johnson, his paternal grandparents Les and Deen Johnson, and his maternal grandparents Frank and Kathie Wiley. A Funeral service is scheduled for 2:00pm on January 26th at Sanders Funeral Home with Reverend Bruce Cotton officiating. Flowers, donations, and condolences may be offered at Sanders Funeral Home 1420 Main ST Lubbock TX 79401. “ A million times I’ve needed you. A million times I’ve cried, if love alone could have saved you you never would have died. In life I loved you dearly, In death I love you still. In my heart you hold a place, no one else can fill. It broke my heart to lose you, but you didn’t go alone. Part of me went with you the day God took you home. “

Christopher Johnson of Lubbock TX was called home by our Lord and Savior on January 19th 2021 at the mere age of 36. Christopher was born in Midland TX on January 18th 1985 to Larry and Catherine Johnson. His family moved to Buffalo Springs... View Obituary & Service Information

The family of Christopher Don Johnson created this Life Tributes page to make it easy to share your memories.

Christopher Johnson of Lubbock TX was called home by our Lord...

Send flowers to the Johnson family.