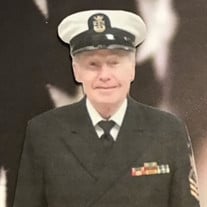 Claude Allen Mack was born January 31, 1932 to the late Claude Ray and Millie Lucille (Speed) Mack in Loop, Texas. He attended high school in Seminole, Texas where he was able to run a four minute mile on the track. His first job was with Bell telephone while he was in High-school. Directly following his graduation in 1951, he enlisted in the Navy and reported to Monterey, California for Naval Officers Engineering school. Following this, he was sent to the Naval Administration Unit in Albuquerque, New Mexico at Sandia Base. While there, he received three personal letters from his captain with Superior ratings for Atomic Weapons training he performed. During his stay in Albuquerque, Claude had a definite personal experience with the Lord Jesus Christ that had a lasting and profound effect on his life. His attitude about life itself changed dramatically. Claude departed to the Territory of Hawaii in Oahu as part of a nuclear weapons team. There, he met and married Roberta Gene Miller in 1956. After he decided to make the Navy his career, he served on three different ships, a destroyer, the USS Rochester, an aircraft carrier, the USS Coral Sea and a sub tender, the Sperry. His job included ship to shore communications and electrical work. He retired from the Navy in 1970. After retirement, Claude and Roberta entered Church work full-time. They spent 35 years in service at Bowen's Mill Christian Center Fitzgerald, Georgia helping people in need. Claude was always "fixing things" whether mechanical or electrical. Claude was an ordained minister and functioned as an elder in the church. His beloved wife, Roberta, preceded him in death. Claude is survived by his sister Joveeda Thornton (Vernon Thornton) of Hallettsville, Texas, and brothers Darvin Mack (JoAnn Mack) of Hobbs, New Mexico, Winferd Mack (Gloria Mack) of McKinney, Texas and his three daughters Lois, of Lubbock, Texas, Jessica and husband Matt Sanchez also of Lubbock, and Maureen Yordy with her husband, Daniel of Houston, Texas. Claude also has five grandchildren, Kyle Yordy wed to Shelbie (Stephens) Yordy, Johanna (Yordy) Schneider married to Matt Schneider, Katrina Yordy, James Yordy and Breanna Sanchez. His two great grandchildren are Gabriel and Konrad Schneider.

Claude Allen Mack was born January 31, 1932 to the late Claude Ray and Millie Lucille (Speed) Mack in Loop, Texas. He attended high school in Seminole, Texas where he was able to run a four minute mile on the track. His first job was with Bell... View Obituary & Service Information

The family of Claude Allen Mack created this Life Tributes page to make it easy to share your memories.

Send flowers to the Mack family.