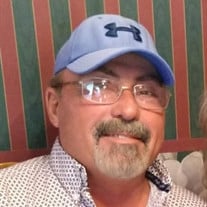 Dan was born September 13, 1962 to Shirley & Ardell Gill in Lubbock, TX. They moved to Florida and then later came back to Texas & settled in Idalou next to his maternal grandparents, Mary Frances & Alvin Applegate. Dan was very fond of Alvin & Mary Frances and they were an important part of his life especially, after losing his father at age 13. Upon graduating from Idalou High School, he was a running back for University of Florida, where he accumulated 29 semester hours. He then went into oilfield work starting out as a bulk, acid & chemical truck operator and transferred to the North Slope, Alaska, as an operator. He took position as crew supervisor of 28 men and was awarded the first ever exclusive stimulation contract with BP Exploration on the Slope. Dan was on the North Slope, Alaska from 1987 to 1996. He continued to work in the oilfield as a Consultant (or Company Man) since 2012. When on leave from Alaska, Dan worked with his Grandpa Alvin at home in Lubbock on various construction projects at the 6666 Ranch in Guthrie which kept them busy for several years. Dan enjoyed and became very good at custom furniture, any kind of woodworking, remodeling, building, & welding, cabinet making, even brick laying which he did for many years in/out of the oilfield. He loved old cars and performed several total renovation projects and he was good at it and anything else he did. He loved to fish but didn't get to go enough, he loved the beach, rivers, lakes & loved being outdoors. He always had to have a project going & could not be idle for long. For many years Dan had the idea to start a vineyard and on his birthday, Sep. 13, 2018, he started Covenant Vineyards in Lynn County. Dan went to be with the Lord on Saturday March 5, 2022 and leaves behind his wife of 13 years, Donna Burgess, Mother-In-Law Sue Burgess, Sister-In-Laws Susan Oliver, Beverly Burgess, Rhonda Greco and husband, Marc Greco. His wife and family will mourn the loss of this special man. Visitation for family and friends will be Sunday March 13th from 2 to 3:30 pm at Sanders Funeral Home Chapel, 1420 Main Street Lubbock, TX. Private burial will be in Floydada, TX where his grandparents are buried. 'You'll come and find the place where I am lying and kneel and say an "Ave" there for me'...Danny Boy

Dan was born September 13, 1962 to Shirley & Ardell Gill in Lubbock, TX. They moved to Florida and then later came back to Texas & settled in Idalou next to his maternal grandparents, Mary Frances & Alvin Applegate. Dan was very fond of Alvin... View Obituary & Service Information

Send flowers to the Gill family.