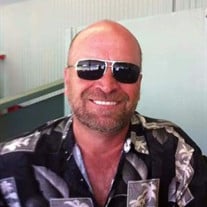 Darin Eugene Rouse, 56 years of age, gained his wings on Tuesday, April 12, 2022 at home surrounded by family and pets. Memorial Services will be held Saturday, April 16th, 2022, at 10:30 a.m. at Generations Church (5201 University Ave) with Pastor Ed Ainsworth officiating. Interment will follow at Peaceful Gardens Cemetery under the direction of Sanders Funeral Home. Visitation will be held Friday, April 15th, 2022, from 7:00 p.m. to 8:30 p.m. at Sanders Funeral Home. Darin was born in Lubbock, Texas to the late Gene and Jimmie Rouse. He was the youngest of six children. He was a graduate of Coronado High School and immediately joined the United States Marine Corps. After serving honorably, he moved to Amarillo, Texas where he married Lorrie Marrs in 1989. They share two wonderful children, Mykla Betty Marie and Dillon Chase. He worked for Coca-Cola Bottling Company for many years and won two Truck Rodeos. Darin transferred to Lubbock with the company and later worked for Saia Motor Freight and then chose to return to college and earned his HVAC license. He owned and operated Rouse Heating and Air Conditioning. Darin married Michelle Bailey in 2012, where he gained an additional daughter, Danielle Honea and additional son, Matthew Goin. He enjoyed spending time in Vegas and at the beach. He was a dedicated father to his children and an exceptional G-Pa to his grandkids Brooklyn, Bentley, Coy, Mayley, and Laken. Darin was also a wonderful brother, uncle, cousin, and friend. Those left to mourn his passing: wife, Michelle Rouse of Lubbock and his former wife and mother of his children, Lorrie and Jason Phillips of Amarillo; his children, Mykla and Aaron MacDevitt of Lubbock, Dillon Rouse, of Pampa, Danielle and Ricky Honea of Lubbock, and the late Matthew Goin; his brother James and Beverly Rouse of San Antonio, his sisters Debbie and Rodney Farmer of Ft. Worth, Raylene and Richard Sexton of Lubbock, and preceded in death by his older brothers, Donald Ray and Joel William Rouse, his grandchildren, as well as numerous nieces, nephews, and cousin.

The family of Darin Eugene Rouse created this Life Tributes page to make it easy to share your memories.

Send flowers to the Rouse family.