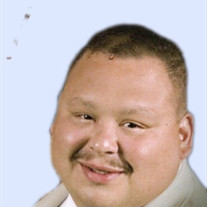 David Maisonet peacefully passed away on March 1, 2021. He was born to Moises and Dominga Hernandez-Maysonet on August 22, 1969 in Miami, Florida. He married the love of his life, Teresa on August 7, 1999. He attended Wayland Baptist University before working at the Lamesa, Brownfield and Plainview Prison Units before becoming disabled. David became a member of St. Joseph's Catholic Church on April 19, 2014 where he served as a 1st Grade CCE Teacher, Altar Server Director, Lector, Altar Server Director and Communion Minister. He then joined and served with the Knights of Columbus Council #8097. He was an active member of the ACTs Community making his first retreat in 2009. He would go on to serve on retreat numbers 19, 21, 23, 27 and then served as the director of Men's Retreat #30. David loved his religion and was an active spiritual advisor to many of his friends. David was preceeded in death by his father, Moises Maysonet. David is survived by his beloved wife, Teresa, his mother Dominga Hernandez-Maysonet; his three brothers Sam (Vanessa) Maysonet of Plainview, Marcos Maysonet of Lubbock Moises (Gracie) Maysonet of Plainview and his adopted sister Mindy Paniagua-Yarbrough of Lubbock. His nephews Moises Maysonet, John Maysonet, Mark Maysonet, Israel Maysonet, Xavier Maisonet, Jonathon Hernandez and Joshua Hernandez, and Vincent Maisonet. His nieces, Alejandra Hernandez, Cassandra Hernandez and Maria Castro, and Sami Maisonet. His God-children, Daniella Kongstuedt Pope, Moises Maysonet, Cassandra Hernandez, Cipriana Montelongo, and Sara Rangel. His love for God, cheerful attitude, sense of humor and Gentle Spirit will be missed by all who knew and loved him. His family will receive friends from 9:00 a.m.-7:00 p.m., Friday, March 5, 2021 at Sanders Funeral Home and a rosary service beginning at 7:00 p.m. in Sanders Memorial Chapel. Graveside services will be held at 2:00 p.m., Saturday, March 6, 2021 in the City of Lubbock Cemetery.

David Maisonet peacefully passed away on March 1, 2021. He was born to Moises and Dominga Hernandez-Maysonet on August 22, 1969 in Miami, Florida. He married the love of his life, Teresa on August 7, 1999. He attended Wayland Baptist University... View Obituary & Service Information

The family of David Maisonet created this Life Tributes page to make it easy to share your memories.

Send flowers to the Maisonet family.