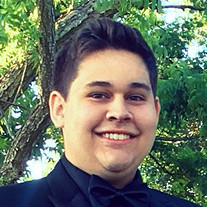 With deepest sorrow, we announce the peaceful passing of Deacon William Godlove, our beloved son, grandson, family member, friend, and gamer on July 3rd, 2020 in Lubbock Texas. Deacon was 19 years young. He is survived by his loving mother and father, Lindsey and Brandon Rind of Houston Texas. Also, his maternal grandparents, Bill and Charlotte Godlove of Lubbock, along with his paternal grandparents, Frank and Raedel Rind of Brownwood, his God-Parents, Roger and Tracy Lewis of San Antonio, his Uncle Jimmy Godlove of Lubbock. Also surviving are numerous aunts, uncles, cousins and good friends from school, and all of his domestic and international gamer friends. Deacon was born in Lubbock on June 1, 2001, and later moved to Houston. While living in Lubbock, Deacon was a member of the South Plains Council of Boy Scout Troop 140. He played MOB basketball, baseball with the Frenship Youth Baseball League, and practiced Jujutsu martial arts. Deacon attended High School at Clear Lake High School in Houston, and graduated in the Class of 2019. He was a member of the Clear Lake Band, where he played in the Pit as part of the Percussion section. Deacon served both at Clear Creek Community Church - Clear Lake Campus where he looked forward to attending camps' year round and on the local Library Teen Advisory Board where he bonded with fellow gamers and readers. He was currently enrolled in online classes with San Jacinto Community College and planned to major in Computer Programming, specializing in Video Game Graphic Design at Full Sail University in Winter Park, Florida. Deacon was charismatic, compassionate and a whole hearted son of God. He could recall scripture, biblical stories, history and all things science in an impressive, yet modest way. His innocence, coupled with his mature perspective of the world was awe inspiring. He was an avid gamer and reader. He enjoyed spending time at the Library with his friends; they considered him to be the life of the party. Deacon also enjoyed playing chess with his Pepaw, board games, jet skiing, archery, target practice at the range, fishing and above all, making people laugh with his impressions and incredibly accurate accents (especially English accent discussions with his Mom). He spent countless hours spending time playing online games with his friends, and developed a strong brotherhood both domestic and internationally. His friends said he was a self-proclaimed gaming "Boss". He enjoyed attending plays, musicals and anything related to Harry Potter. His favorite holidays were the 4th of July, Halloween, and Christmas. Most importantly, Deacon had a deep love for his family, friends, church and traditions. He cherished the time he spent with others and he was an example to all, at living in the moment. Deacon is loved by so many. His passing has left a hole in the hearts of his family and friends. His memory will live on with them all. Visitation with the family will be at Sanders Funeral Home on Friday, July 10th from 6:30-8:00 pm. Funeral services will be held Saturday, July 11th at 1:30 pm at St. Luke's Methodist Central, 3708 45th St, Lubbock, TX 79413 . Virtual viewing of the service can be seen on St. Luke’s Facebook live feed. Interment will follow at Resthaven Memorial Park Cemetery. Deacon will rest next to a precious family friend/brother, Jason 'Tonto' McDonald. Officiating will be Pastor Karl Garcia from Clear Creek Community Church in Houston, Texas. Pallbearers will be: Jimmy Godlove, Joey McDonald, Jeremy McDonald, Ryan Stevens, Matt Rind, Nate Laukka, Shaun Norwood and Brendon Beadles. Honorary Pallbearers include: Roger Lewis, Mike Rind, Dustin Rind, Charlie Shedd III, Tripp Leal, Will Little, Jackson Bacon, Jalen Ledesma, Jordon Ledesma, Alex Campillo, Max Fairwheather and Grant. Those who chose to give a gift to honor Deacon are asked to make a contribution in his name to either "The League City Animal Shelter" in Houston, or the "Texas Marine Mammal Stranding Network" in Galveston. Deacon adopted his dog, Lincoln, from the shelter, and volunteered when he was younger with his mom where he acted as the dolphin during training sessions for incoming volunteers at the Stranding Network. www.dolphinrescue.org

With deepest sorrow, we announce the peaceful passing of Deacon William Godlove, our beloved son, grandson, family member, friend, and gamer on July 3rd, 2020 in Lubbock Texas. Deacon was 19 years young. He is survived by his loving mother... View Obituary & Service Information

The family of Deacon William Godlove created this Life Tributes page to make it easy to share your memories.

With deepest sorrow, we announce the peaceful passing of Deacon...

Send flowers to the Godlove family.