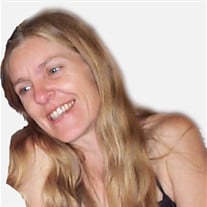 Deborah Jean Settler, 64, of Lubbock, Texas passed away February 22, 2022. Her maiden name was Deborah Jean Striley. Debbie was unfortunately stricken with Lewy Body Dementia at an early age of 56 and struggled with this horrible disease till the Angels came for her. According to numerology, 2/2/22 is an Angel number, it is about connections and coming together. Debbie was surrounded by her life long partner, her children and her brothers and sisters. She passed peacefully in the presence of her loved ones. Debbie was born March 18, 1957 in Amarillo, TX to Kenneth and Betty Ashley Striley. She married Gregory Quinn Settler on September 3, 1974 in Dallas, Texas by the Justice Of The Peace in the basement of the court house. They owned and operated Settler Construction from 1974 until 2015. Debbie answered the phone in a professional manner. Managed all office work while raising 5 children. Painted properties, built cabinets, roofed houses and commercial buildings. She was a jack of all trades. There was nothing she was not capable of doing and doing well. Debbie was a loving wife and a proud mother of five children. She had the purest heart and was always looking to help others. Her main goal was seeing that her family had everything they needed and that they all stayed together, including the Strileys. She enjoyed traveling, seeing the country and relatives. In her free time, she enjoyed puzzles and family games, like card games, skippo, etc. She did jigsaw puzzles, crossword puzzles and word games. Debbie lived with Greg in Irving, Texas in their early years. Later settling in Lubbock, Texas. Loved ones include her husband, Greg Settler; mother, Betty Ashley; children, Doug Settler, Misty Settler, Brad Settler and Robin Settler; siblings, Steve Striley, Linda Henke, Connie Baker, Clyde DeLoach and Kenny Striley; grandchildren, Averyl Settler, Chloe Settler, Geneva Settler, Calypso Cannon, Phoenix Settler, Donovan Myrick Settler, Eros Settler, Heliodor Settler, Sophia Trevino, Roman Trevino and Finnegan Stigliano; great-grandchild, Eero Bartley. Preceded in death by her father, Kenneth Striley and son, Jeff Settler. A celebration of life service for Debbie J. Settler will be 2:00 p.m., Monday, February 28, 2022 in Sanders Memorial Chapel. Graveside services will follow in the City of Lubbock Cemetery. Please celebrate the life of Deborah by visiting www.sandersfuneralhome.com. A webcast of services will be available as well as our online guest book.

Deborah Jean Settler, 64, of Lubbock, Texas passed away February 22, 2022. Her maiden name was Deborah Jean Striley. Debbie was unfortunately stricken with Lewy Body Dementia at an early age of 56 and struggled with this horrible disease till... View Obituary & Service Information

The family of Debbie J. Settler created this Life Tributes page to make it easy to share your memories.

Send flowers to the Settler family.