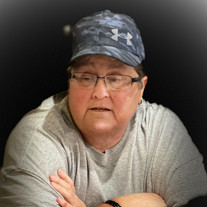 On February 17, 1964 Diana Denese Drum entered this world like a little firecracker but left us very quietly on January 3, 2021. At an early age, Denese became involved in a variety of competitive sports, the first of which was go-karts. At age 8 her dad modified a go-kart to fit her small size, and that led to her racing competitively – and winning. From go-karts, she moved on to horses, her true love. As in everything she set her mind to, she was a winner here as well. In 1983 she was elected District Queen of the AASPRC. From horses she began her softball career which lasted up to the time of her passing. She played competitively with her brother coaching for several years then began her own coaching career. She coached two teams of “her boys” for 8 years, becoming the winningest coach in Lubbock Youth Softball history along with her brother. Upon retiring from coaching, she became a board member for LYS and remained in that position until she left this earthly life. While living in Dallas, Denese learned dog grooming and upon her return to Lubbock continued in that profession. She established her own business, Dog Gone Beautiful, which is one of the top grooming shops in Lubbock. Denese leaves behind to cherish her memory her mother Jerrienne, her partner Cindy Rowlett, her two children Amanda Bethune and Kristi Keys and husband Lance, her niece, the apple of her eye, Sydni Dylan, her aunt Sharon Mooney, her sister-in-law Sjanna, four grandchildren Kristal, Trenton, Emma, and Braxton, and a host of aunts, uncles, cousins and friends. Visitation will be held Friday January 8th from 7 to 8:30 pm at Sanders Funeral home 1420 Main. Services will be held Saturday, January 9th at 10:00 am at The Worship Center, 7116 82nd, with Trish Turnbow officiating. Honorary pall bearers will be Christi Beadle, Karen Moeller, Melissa Hagerstrand, Debbie Deary, J J Johnson and Edward Ursua. Graveside services will follow at 11:30 at Resthaven Cemetery. In lieu of flowers, Dense would want contributions to be made to the American Diabetes Association, diabetes an ugly disease both she & her brother suffered with.

On February 17, 1964 Diana Denese Drum entered this world like a little firecracker but left us very quietly on January 3, 2021. At an early age, Denese became involved in a variety of competitive sports, the first of which was go-karts. At... View Obituary & Service Information

The family of Diana Denese Drum created this Life Tributes page to make it easy to share your memories.

Send flowers to the Drum family.