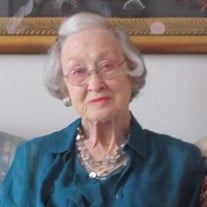 Doris Lynn (Forgason) Davis, beloved wife, mother, and grandmother passed into her heavenly home on Monday, September 7, 2020. She was 96 years old. Service to be held at Sanders Memorial Chapel at 10:30 a.m. on Friday September 11, 2020 with Tim Talley officiating. Graveside service to follow at City of Lubbock Cemetery. She was born on August 5, 1924, in Megargle, Texas, the first child of Mary Lucille (Miller) Forgason and Herman Claude Forgason. By the early 30s, the family moved to Goodland. Doris’s brother, Claton, was born in 1930. On September 19, 1937, Claude died of pneumonia, and the family moved to Sudan to be near his family. Doris attended high school in Sudan, graduating in 1940 at the age of 16. In August 1940, Doris met George Andrew Davis, Jr. at church in Maple, Tx., and they were married on Feb. 21, 1943, G.A. had enlisted for pilot training in the Army Air Corps, and he flew as a fighter pilot in World War II in the South Pacific from spring 1943 to March 1945, becoming an ace. As the wife of a pilot, Doris couldn’t sleep until she knew he would have landed, wherever he was flying. Doris lived with her mother and her new husband, William A. Cantwell, while she awaited the birth of the first Davis child, Mary Margaret, in 1944, in Abilene. Their second child, George Andrew Davis III, was born in 1950, in Riverside, California. G.A. moved his family to Lubbock, Tx., in the summer of 1951, because Doris’s family was there. In early fall, he was sent to Korea, where he flew F-86’s, becoming a jet ace. On Feb. 10, 1952, G.A. was shot down and listed as missing. Doris was pregnant with their third child, and Charles Lynn Davis was born in April. Her husband was awarded the Medal of Honor in 1954; and she missed him for the rest of her life. Doris loved her home and excelled at anything creative. She made clothes for herself and her daughter; she painted in oils, refinished furniture, did several kinds of needlework, built picture frames and cut mats, and created a welcoming, loving home wherever she was. She was interested in everything and was fun to talk to. She was thrilled to become a grandmother. She was committed to her family, caring for her son George until his death in 2005 and embodying self-sacrifice and love for others. She lived in her home until advancing confusion and frailty necessitated her move to Raider Ranch, and she remained there until she passed. Doris was a member of Broadway Church of Christ. She was preceded in death by her father, husband, brother, mother, and son George. She is survived by her daughter, Mary Margaret Patton (John C.), of Kennewick, Wa., and their daughter Jennifer Leigh Patton of Portland, Or.; and her son Charles Lynn Davis and his wife Vaneece, and their daughters Donna Sullivan (Brian) of Midlothian, Tx.; and Traci Grubb (Rob) of Lewisville, Tx. The family greatly appreciates the loving care of the nurses and staff at Area Community Hospice, as well as the kindness of the caregivers at Raider Ranch.

Doris Lynn (Forgason) Davis, beloved wife, mother, and grandmother passed into her heavenly home on Monday, September 7, 2020. She was 96 years old. Service to be held at Sanders Memorial Chapel at 10:30 a.m. on Friday September 11, 2020 with... View Obituary & Service Information

The family of Doris Lynn Davis created this Life Tributes page to make it easy to share your memories.

Send flowers to the Davis family.