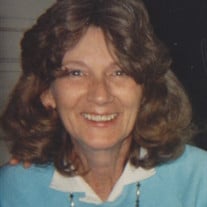 Dorothy was born February 9, 1938 to Adiel (Dell) and Bertha Lievrouw in Mitchell, Iowa. As a child, Dorothy, or Dort, as she was known, loved entertaining her younger siblings and admiring her elder siblings. After graduation from Osage High School in 1956, she moved to Denver, Colorado to be with her sister Mary Lee. They then moved to Lubbock, Texas, where she met and in 1959 married Ralph R. Robertson Jr. Together they enjoyed trips to Santa Fe, NM, Taos, NM and Colorado. Their love for the mountains prompted their move to Del Norte, Colorado in 1969. In Del Norte Dort worked at the nursing home and at Del Norte Hospital in the radiology department. Eventually she went to work for the Chula Vista Medical Clinic. Though she enjoyed being in medicine, she thrived when sharing her artistic abilities. She taught sewing in 4-H and gave art lessons to many. Throughout the years in Colorado she displayed her paintings at several galleries and eventually opened her own decorating shop, Dort Decorating and Art. In 1981 she was called to Northern New Mexico and relocated to Eagle Nest, NM. There she enjoyed using her decorating skills in Angel Fire. She also opened the Wheeler Dealer, a store for art and framing, crafts, and alterations. She continued painting landscapes and had success with several placings in art shows throughout the region. In 1988 she returned to Osage and cared for her mother, Bertha Lievrouw, until her passing in 2006. She and her sister, Mary Lee Galey opened Galey’s Emporium in Osage. The store allowed Dort to continue sharing her art while providing an outlet for local artist to display their work as well. She was a master of matting and framing art, blending matt colors that seemed unconventional but complimented the art without overwhelming it. She was also a talented seamstress. She had her place in Mitchell that she loved. Her favorite thing was working in her yard and watching the deer and birds. She had a large variety of plants and flowers that when in bloom created for her, her own paradise. In 2017 she moved to Texas to be with and near her children, and her sister, Mary Lee Galey. Dorothy was preceded in death by her parents, brothers Walter Lievrouw, Charles Lievrouw and Dale Lievrouw, and her sister, Rose Lievrouw Ostrander. She is survived by her children, Theresa D. Chester (Tony) of Lubbock, TX; Ralph R. Robertson III (Patty) of Del Norte, Co; Jack B Robertson (Jana) of Hobbs, NM and Regina R. Robertson of Lubbock, TX; sisters Mary Lee Galey of Osage, IA and Lubbock, TX; Erma J. Johnson of Deer Park, WA and her brother Richard A. Lievrouw of Colorado Springs, CO. and her 6 grandchildren, Kaitlyn, Troy, Sara, Tori, Connor and Shane. In lieu of flowers the families wish for you to plant flowers in your garden, appreciate the splendor of a sunset, a sunrise, or the glory of a mountain range. Be in wonder of your children. These are things that gave Dort the greatest pleasure.

Dorothy was born February 9, 1938 to Adiel (Dell) and Bertha Lievrouw in Mitchell, Iowa. As a child, Dorothy, or Dort, as she was known, loved entertaining her younger siblings and admiring her elder siblings. After graduation from Osage High... View Obituary & Service Information

The family of Dorothy Jean Robertson created this Life Tributes page to make it easy to share your memories.

Send flowers to the Robertson family.