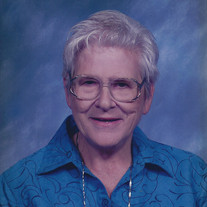 Jacquelyn (Jackie) Thompson entered her heavenly home November 18, 2020. She was born July 6, 1929 in Fannin County, Texas to Matas Hutson and Ruby Francis Scott Coursey. After moving from East Texas to the Lubbock area in the early 1940s, the family resided in Wilson, Texas, where she graduated from Wilson High School in 1948. She later married Eugene (Gene) Dale Thompson at Arnett Benson Baptist Church in Lubbock, Texas. They had a daughter Cheryl. Later they moved to Arkansas then to various towns in Oklahoma, where she lived for about 30 years. She was a strong Christian of the Baptist faith. She taught Sunday School at church, and she and Gene helped with youth groups. After the death of her husband in 1976, she worked at various jobs to provide a living for herself and her daughter. She rose to the position of manager of the shoe department at Walmart in Shawnee, Oklahoma for 15 years before she retired. She was a beloved mother, grandmother, great-grandmother, aunt, sister, and sister-in-law. Always cheerful and helpful, she brightened the lives of many. She was a skilled seamstress, specializing in the creation of dolls and doll clothes. In 2005, she moved to Lubbock, where she resided with her brother Claylan for 8 years. After a fall resulting in a broken hip, she had to enter a skilled nursing facility in order to receive the care she needed, where she lived for 7 years. She was predeceased by her parents, a younger brother, Gerald Coursey, a younger sister, Ruth James, a niece, Pamela James, and a nephew, Gary James. She is survived by her daughter, Cheryl Moss (Terry), Tacoma, Washington, a grandson, Cody Lammers (Becca), great-granddaughters Marlowe and Clementine, all of Gig Harbor, Washington, older brother, Hartman Coursey, younger brother, Claylan, both of Lubbock, and a host of nephews and nieces. Her always cheerful spirit, hearty laugh, sweet nature, and outflow of a loving heart will be greatly missed by her family and friends. The family extends grateful thanks to the staff of Bender Terrace for their loving care of Jackie for these seven years, to Hospice of the South Plains and Sanders Funeral Home for their help to the family. A memorial service will be held on Saturday, November 21, at 2:00 PM at Sanders Funeral Home, 1420 Main Street, Lubbock, Texas 79401. Burial will be at Cummings Cemetery of Maud, Oklahoma on Monday, November 23, at 3:00 PM.

Jacquelyn (Jackie) Thompson entered her heavenly home November 18, 2020. She was born July 6, 1929 in Fannin County, Texas to Matas Hutson and Ruby Francis Scott Coursey. After moving from East Texas to the Lubbock area in the early 1940s, the... View Obituary & Service Information

The family of Dorothy Jacquelyn Thompson created this Life Tributes page to make it easy to share your memories.

Send flowers to the Thompson family.