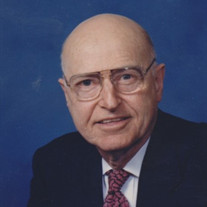 T.H. Holmes, Jr. M.D. died on March 18, 2021 at the age of 99 years old. Following a private burial, memorial services will be held in the Chapel at First United Methodist Church, Lubbock on March 23, 2021 at 2:00 p.m., under the direction of Rev. Jim Powell. A reception will follow in the church parlor. His family will receive friends on Sunday, March 21, 2021 from 6-7:30 p.m. at Sanders Funeral Home. Dr. Holmes was born on a farm near Ralls, Texas on August 6th, 1921, to Theo and Betty (Reed) Holmes. He graduated from Ralls High School 1939 and Texas Tech 1943. He and Doris Olga Carter were married on December 26th, 1943. Doris died on September 6th, 2007. He received his Doctor of Medicine from the University of Tennessee College of Medicine, in Memphis, in June 1946. While in medical school, he was enlisted in the U.S. Army Specialized Training Program. He was commissioned as a First Lieutenant, Medical Corps, upon graduation from medical school. Following a year of internship at Harris Memorial Methodist Hospital, Fort Worth, Texas, he was recalled to active duty. Sent to Japan, Dr. Holmes served two years as a Public Health Officer with the Guam Military Government Team. He was separated from military service as a Captain in June 1949. After a one-year residency in general practice, Dr. Holmes returned to his hometown of Ralls, Texas where he was a general practitioner of medicine until June 1956. He then went to Houston, Texas where he trained in Pediatrics for two- and one-half years at Baylor Affiliated Hospitals. Dr. Holmes opened his Pediatric practice in Lubbock in February 1959. He held memberships in Lubbock-Crosby-Garza County Medical Society, Texas Medical Association, American Medical Association, Lubbock Pediatric Society and American Academy of Pediatrics. He was on the medical staff of several Lubbock hospitals. He served as Chief-of-Staff at Methodist Hospital, Lubbock, as president of the Lubbock-Crosby-Garza County Medical Society and as founding president of the Lubbock Pediatric Society. After leaving private practice in October in 1987, he worked part-time as a Pediatric consultant to Division 2 Texas Department of Health, Medical Consultant to LISD and as a Clinical Professor of Pediatrics at Texas Tech University Health Sciences Center. Dr. Holmes is predeceased by his wife Doris, and his brother, J. Wiley Holmes. Survivors include his sister Elizabeth Morrison, his son Dr. Steve Holmes, and wife Connie, his daughter Barbara Holmes Fish and husband Curtis Fish, grandchildren Jennifer Leson and husband Ian, Stephanie Holmes, C. Mitchell Fish, Jessica Fish Andrusick and great grandchildren Jillian Leson, Oliver Leson, and Tenley Andrusick. The family suggests memorials be made to the Alzheimer's Association-West Texas Chapter at https://act.alz.org/site/TR/Walk2021/TX-WestTexas?team_id=673514&pg=team&fr_id=14824

The family of Dr. T. H. Holmes, Jr created this Life Tributes page to make it easy to share your memories.

Send flowers to the Holmes family.