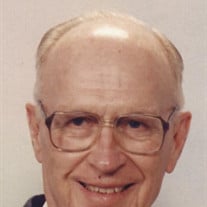 Earl Gilmore passed away on June 8, 2020. We will celebrate his life of 96 years at 11:00 am on Friday, July 10, 2020 at Sanders Funeral Home. Earl was born to Lee and Nora Gilmore on July 9, 1923 in Turkey, Texas. He graduated from Wheeler High School and went on to receive his Bachelor of Science degree in Chemistry at the University of Texas. He then joined the United States Navy and attended Officer School in Philadelphia where he graduated as a Lieutenant Junior Grade. Earl was an Engineer in the Engine Room on a Landing Ship Tank during World War II and was in combat in the Battle of Leyte Gulf in 1944. After the war, he married the love of his life, Earline Thomson in 1946. He went back to school and graduated from Texas Technological College with a Master's degree in Chemistry and then to the University of California and received a PH.D.in Physical Chemistry. His work career included China Lake Weapons Center in California and the Helium Research Center in Amarillo as well as teaching Astronomy, Chemistry, and Math at various colleges including Oklahoma A&M, Texas Tech University, Amarillo College, and West Texas A&M. Earl was preceded in death by his parents, Lee and Nora Gilmore, his wife, Earline Gilmore, and his sister, Helen Taylor. He is survived by daughter, Dianne Harris and husband Coy of Lubbock; son, Steve Gilmore of Lubbock; grandsons, Shelley Harris and wife, Sandra of Lubbock and Cary Harris and wife, Autumn of Lubbock; great-granddaughter, Daylee Harris of Lubbock; nieces, Cynthia Mills of Atlanta, Georgia, and Shelley Marcos of Pflugerville, Texas. Earl was a member of the San Jacinto Methodist Church in Amarillo. He enjoyed spending time with his grandsons, propagating fruit trees, astronomy, cancer research, and working with colleagues in wind research at the Alternative Energy Center, West Texas A&M, Canyon. The family would like to express appreciation to the Beehive Assisted Living Center and Beond Faith Hospice for their great care of Earl. Memorials may be sent to the American Windmill Museum, 1701 Canyon Lake, Lubbock, Texas, 79403.

The family of Earl Howard Gilmore created this Life Tributes page to make it easy to share your memories.

Send flowers to the Gilmore family.