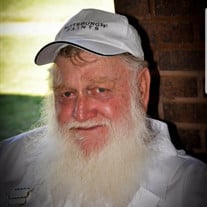 On October 1,2021 At the young age of 80 ,Red "Poppa" Miers of Lubbock Texas went to fish with the Lord . Red was born in Bangs ,Texas on August 30 1941 to his parents John W. Miers & Ruth Williams Miers . He attended school in Post and Lubbock ISD. Red chose to join the United States Army at the tender age of 17 to serve his country in which he truly loved. He was stationed in Germany and was a member of the honor guard. He earned many accolades while enlisted. Red returned to Lubbock when he was discharged and began working as a painter for the union as a pace setter untill eventually opening his own bussiness Miers Painting. Red met and married the love of his life Pearl Clay. After many years of marriage they realized that they had actually met in gradeschool and Red had asked Pearl to be his Valentine to which she declined. ...little did she know she would end up married to the freckle faced red headed boy for 57 years and raise two wonderful children together . Daughter Syndi Lofton & Son Rafe Miers, both of lubbock. There is not enough paper to accurately describe Red Miers. He believed in hard work and honesty . He was a larger than life character and never met a stranger . Red left an imprint on the lives of everyone he ever came in contact with...he worked hard and loved even harder. Red was well respected in the painting community as well as outside of it . He did business as Miers Painting right up untill the day he passed . Red was a mentor to many in his trade and a hero to many more. A trusted friend and respected boss, Red stepped in and played the part of Dad or Poppa to so so many that didnt have one. He took many strays under his wing and kept them there for a lifetime of friendships. His word was his bond and a handshake was more binding than any contract ever written. He respected and demanded the same. His children and grandchildren were privileged to be rasied as so. Treat the janitor like you would the CEO of the company. Red loved fishing he loved his dogs, chickens and horses; but most of all he loved his family. You never left Red without his raspy voice telling you he loved you. Red was proud to be a 32nd degree Mason. He was a Khiva Shriner and had served as a Khiva Clown which brought him much joy. Red enjoyed his life and lived it exactly the way he wanted to. He was a natural born leader and instilled this into his kids and grandkids. Red was preceeded in death by his parents John and Ruth, his brother Dub Miers, his beloved nephew Lonnie Miers, a sister Florene Manning and two of her children. He is survived by his loving wife Pearl, his daughter Syndi Lofton and her husband Joe, his son Rafe Miers, his grandchildren Brandon Lofton, Jason Lofton, Natalie Cantu & Her husband David, Daniel Miers, Shye Miers & Wife Susan, Kaleb Miers and his fiance Briana Christensen; 4 beloved Great Grandchildren- Kyra Sandoval, Wyatt Lofton, Phoenix Cantu, Adaline Jo Miers, as well as; a slew of nieces, nephews and cousins. The family asks that in remembrance, you bless someone...pay it forward to someone in need; as Poppa did so so many times unbeknowst to anyone.

On October 1,2021 At the young age of 80 ,Red "Poppa" Miers of Lubbock Texas went to fish with the Lord . Red was born in Bangs ,Texas on August 30 1941 to his parents John W. Miers & Ruth Williams Miers . He attended school in Post and Lubbock... View Obituary & Service Information

The family of Elbert D. "Red" Miers created this Life Tributes page to make it easy to share your memories.

Send flowers to the Miers family.