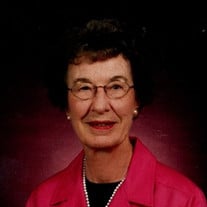 Dr. E. Carolyn Ater was born, October 1, 1930 in Clarksburg, Ohio. She has been a resident of Lubbock, Texas since 1969. After graduation from Frankfort High School, she attended Asbury College, Wilmore, Kentucky and Ohio State University where... View Obituary & Service Information

The family of Dr. Elizabeth Carolyn Ater created this Life Tributes page to make it easy to share your memories.

Send flowers to the Ater family.