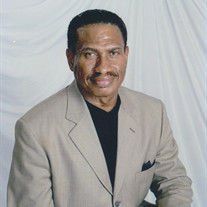 A celebration of the life of Elroy Parks (Baba), 76, of Lubbock, Texas will be held at 11:00 AM Saturday, May 9, 2020 in Sanders Memorial Chapel, with the Reverend Darell Smith officiating. The viewing will be held from 9:00 AM to 7:00 PM Friday, May 8th, 2020 at Sanders Funeral Home. To maintain a safe come and go viewing, we ask to limit groups to three or less. Lillie Parks invites you to celebrate the life of her beloved husband Elroy by visiting www.sandersfuneralhome.com. A webcast of services will be available as well as our online guest book. Elroy transitioned into eternity on April 30, 2020. He was born on April 12, 1944 in Lubbock, TX to Wade and Lillie Parks. As a youth, Elroy participated in the Boys and Girls Club of Lubbock and attended Dunbar High School, but graduated from Booker T. Washington in Elgin, TX in 1963, where he met his first wife, Alice. Returning to Lubbock, Elroy eventually began working at Frito Lay in 1969 where he met his forever wife Lillie Mae Hornsby. Elroy excelled working as a loader and a driver before being promoted to Lead-man, Dock Foreman, Supervisor and ended his tenure as a Shipping Manager. Elroy and Lillie joined in matrimony on November 2, 1992. The Parks’ family were no strangers to entrepreneurship. In the early 1940s elder Wade Parks cleared land to build homes in East Lubbock. Following in his footsteps, Elroy refurbished Frito Lay product carts after retiring. He also owned a beauty supply shop and maintained multiple rental homes. Elroy loved fishing, hunting, westerns, fast cars, and serving as a caregiver to his family and friends. He leaves behind his loving wife of 28 years, Lillie Parks; three sons, Paul Parks, Maurice Pearson, and Jasone Pearson; 2 daughters, Lisa Parks Gregory and Krishunna Smith; (12) grandchildren and (2) great-grandchildren. He is preceded in death by his parents, Wade and Lillie Parks; a sister Mary Glenn Parks Milligan (Big Cat), and a brother Floydell (Floyd) Parks.

A celebration of the life of Elroy Parks (Baba), 76, of Lubbock, Texas will be held at 11:00 AM Saturday, May 9, 2020 in Sanders Memorial Chapel, with the Reverend Darell Smith officiating. The viewing will be held from 9:00 AM to 7:00 PM Friday,... View Obituary & Service Information

The family of Elroy Parks created this Life Tributes page to make it easy to share your memories.

Send flowers to the Parks family.