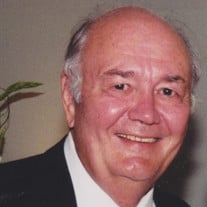 E.Z. “Ted” Hogan Jr. passed away on Monday, October 13, 2020 at High Noon at Covenant Hospital due to complications from COPD. He passed in the company of his only son, Ted, his daughter in law, Christy, and his loving wife of 60 years, Linda Hogan. A graveside service will be held at the City of Lubbock Cemetery on Saturday, October 17th at 2:00 p.m. His four grandsons, along with longtime friends and coworkers Juan Martinez and Gilbert Gutierrez will serve as his pallbearers. Ted was born to Ezra and Laverne Hogan on January 3, 1939 at the old Lubbock General Hospital on 19th Street. He was followed by a younger sister, Margaret, two years later. He attended Dupre Elementary, Thompson Junior High and Lubbock High School. He was an Eagle Scout, attaining the Order of the Arrow. He was the first in his family to attend college, earning a Finance Degree from Texas Technological College in 1962. He met the love of his life, Linda Kay Garner when he was 17 and she was 15. They married four years later on June 10, 1960 and remained together in the home that he grew up in until the day he died. They worked tirelessly together for over 60 years, rarely leaving each other’s sides in pursuit of their dreams. Ted was a man dedicated to principal and integrity. He was a man of simple means and adhered to the strong values of a time forgotten by many. His intense passion for protecting and preserving the South Overton neighborhood and the schools that serve Central Lubbock is memorialized in the buildings and programs that will remain long after his passing. Many historic homes and buildings, the South Overton Residential Historic District, the LEAP program at Lubbock High School, and Cavazos Middle School stand today due in large part to his and Linda’s tireless efforts. But of all his lifelong accomplishments, his greatest source of pride was his family, especially enjoying watching his son and grandsons grow, develop and prepare to follow in his footsteps. While not a regular churchgoer, he was a man of deep, and quiet faith. He was widely read in his thirst for learning. The breadth and depth of his knowledge of history, religion, economics, business, construction, architecture land use planning and business was truly amazing. “Granddaddy”, as he was known by his family, had a passion for teaching as well as learning. He was never happier than when he sat with family, locked in an hours long conversations about anything from WW II, to tales of growing up in Lubbock, and his dreams for the future. The family would like to recognize the efforts of the many physicians, nurses and support staff whose dedicated work over many years kept our Granddaddy with us. You are true heroes, and your efforts will never be forgotten. Ted is survived by his wife Linda, son Ted, daughter in law Christy, four grandsons: Christopher – currently enlisted in the United States navy, Jack- a student at Trinity University, Ben- carrying on the family tradition at Lubbock High, and Charlie – a future Westerner, as well as his sister in law Jan Wilson of Keller, TX and many nieces and nephews.

E.Z. &#8220;Ted&#8221; Hogan Jr. passed away on Monday, October 13, 2020 at High Noon at Covenant Hospital due to complications from COPD. He passed in the company of his only son, Ted, his daughter in law, Christy, and his loving wife of 60... View Obituary & Service Information

The family of Ezra Z Hogan, Jr. created this Life Tributes page to make it easy to share your memories.