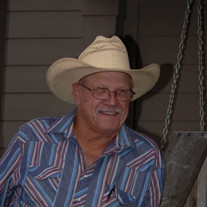 Floyd “Wink” Banister Lubbock, TX - Floyd “Wink” Banister passed unexpectedly from this Earth on Monday, October 19, 2020 at the age of 76. He was born on November 29, 1943 in Liberty Township, Missouri. Wink is survived by his daughter and son in law Jeff and Gina Bridges, daughter and son in law Kevin and Destinee Jarvis, and three grandchildren, Chase and Ella Bridges and Kevin Jarvis, Jr. all of Lubbock. Wink is preceded in death by his parents Floyd and Imogene Banister of Plainview and his wife Sherrye Banister of Lubbock. During his early years, Wink moved with his parents from Missouri to Olton, TX where he spent his growing up years. Wink moved to Plainview to begin his family. He married Barbara Kay Fisch on March 14, 1963 in Silverton. They had a daughter, Gina in 1970. During that time, Wink served as a cook in the National Guard. He was proud of his time as a cook and serving our country in the National Guard. In addition to his National Guard duties, Wink was the Sanitization Supervisor for the City of Plainview. In the mid 1970’s, Wink studied hard to get his private pilot’s license. It was a great joy for him to fly the family’s Cherokee 140 airplane. His favorite place to be was on the lake boating and fishing. But if he couldn’t do that, he would ride motorcycles, shoot guns, fix something, or go dancing. It seems that he was a great Country and Western dancer. Wink made a career change and started running heavy equipment and driving an 18 wheeler. That was a great career for him. He worked hard but was delighted to be in a big truck. Wink took great pride in the construction projects that he helped build around town. He took joy in telling people that he helped build this or that road or bridge. Wink married Sherrye McCallister on October 1, 1991 in Clovis, New Mexico. They raised their daughter, Destinee in Plainview. Wink spent his spare time going to her basketball games, rodeo events and track meets. Nothing made him happier than watching his family do what they loved. As a family, they would take at least one big camping trip per year. Wink was devastated when Sherrye left this Earth on January 21, 2013. Wink has spent the last few years living in The Plaza Nursing Home of Lubbock. During that time, some of his caregivers have become additional family to him. He called Kristi his angel on Earth and loved her so deeply. She was his nurse and loves him greatly. She cared for him in every way. Janet would make and bring soup for him. He said she was the best soup chef around. The staff of The Plaza all seemed to enjoy Wink and his humor. His Physicians Assistant is named Gaye and she took amazing care of him as well. He was always delighted when she came by to check on him. We will forever be grateful to those that cared for him and showed him so much love. The apples of Wink’s eyes were Chase, Ella and Baby Kevin. They love him so much and will miss him forever. Wink was always concerned with making sure the grandkids were safe and happy. He asked almost daily what they were doing. If he knew of anything that could be a danger to them, he was sure to let us know right away. Wink would show off pictures of his grandkids to anyone that would look and he would show them repeatedly. Wink used to say that he was so blessed to have the sons-in-law that he did. He told everyone that they just about walked on water. To say he was social would be a vast understatement. Wink enjoyed spending time with and caring for his family and friends. Family was always very important to him. He was happiest when he could make people smile. He was always saying silly little things to bring laughter and giggles. The funeral service is being held at Sander’s Funeral Home Chapel located at 1420 Main Street in Lubbock on Saturday, October 24, 2020 at 10:30 am. Masks are optional at your own discretion. Please celebrate the life of Wink by visiting www.sandersfuneralhome.com. A webcast of services will be available, as well as an online guest book.

The family of Floyd Winfred Banister created this Life Tributes page to make it easy to share your memories.

Send flowers to the Banister family.