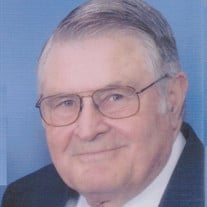 Services for Fred Allen Nixon,90, of Lubbock will be at 2:00 pm, Monday, December 6, 2021, in Lubbock Primitive Baptist Church. Burial will follow at Resthaven Memorial Park. The family will receive friends from 4:00-5:30 pm, Sunday, December 5, 2021, at Sanders Funeral home. Arrangements are under the care of Sanders Funeral Home. Fred passed away on December 1, 2021. He was born October 7, 1931, in Floydada, TX to Leslie Lloyd and Velma Nixon. He graduated from Floydada High School. Fred married the love of his life Eileen Handley on January 24, 1954 and was her Sweetheart for 65 years. He was a sweet, loving and generous husband, father and grandfather. Preceded in death by his parents; his daughter, Linda Gay Nixon Brock who passed away on November 6, 1991; his wife, Eileen Nixon who passed away on October 24, 2019. Also preceded in death by siblings Franklin Delano Nixon and Leslie Lloyd Nixon. Loved ones include his daughter, Sandra Fay Nixon, Dallas, TX; grandchildren, Taylor Nixon Treece, Lubbock, TX, Garreth Allen Rogers, Cedar Hill, TX; brother, Lowell Nixon, Yukon Oklahoma, Loran Nixon, Tucson Arizona, Joy McCulloch, Aledo, TX, and Mary Harbin, Jarell, TX. After marrying Eileen, Fred joined the Armed Forces of the United States Army. While in service Fred was an Engineer Equipment Mechanic. He earned a Good Conduct Medal and a National Defense Service Medal. After serving for 8 years, he was Honorably discharged from the Army in March of 1962. Following the Army, Fred worked for Bruckner Mack Truck Sales for 40 years. He served as a mechanic, Shop Manager, Parts Manager, Sales, Top Area Sales Manager, then General Manager and Vice President. He enjoyed his years with the Bulldogs, and he was respected for his integrity and prowess in selling trucks. Fred and Eileen enjoyed many business trips traveling to cities across the U.S and took a fantastic trip to Australia and even the Bermuda Triangle! Fred was a member of the Kiwanis Club and devised and organized a flag presentation fund raiser. This entailed selling flag presentation services on the holidays to family residences. This meant getting up at the crack of dawn with the trailer loaded full of flags and going from house to house and block to block setting up folks' flags in the pre-dug flag holders in the yard close to the street then picking them up after the holiday. This was an extremely successful fund raiser for the club. Fred and Eileen loved being active in their church. Fred was a Deacon and treasurer as Eileen served as Kitchen Manager for the Lubbock Primitive Baptist church. They were active in their annual meetings and serving at the singing school foundation. Over the years the Nixon and Handley relatives enjoyed getting together for holidays and vacations at the lake. We started out in tents, graduating up to renting lodges then Fred and Eileen bought a lake house at Possum Kingdom, TX. They continued to hold family and friend gatherings for lake fun with all the toys, boats, 4-wheeling and fishing. All of his brothers, sisters, nieces, nephews and grandkids loved seeing Fred hand feed the deer and telling tall tales. Much fun was had at the lake for the ten years they had the property. Fred and Eileen greatly valued education. This is seen in not only sending his daughters to university and graduate schools, but they also hosted several of their brothers, sisters, nephew and their daughters' friends in their home while they went to Tech. In addition, they hosted foreign exchange students. We will all miss a great man who was loving, honest, fun with the wacky sayings and crazy stories that kept us all laughing. He lived a full life until the end at the age of 90.

The family of Fred Allen Nixon created this Life Tributes page to make it easy to share your memories.

Send flowers to the Nixon family.