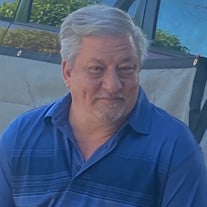 Gary Robert Klein, 60, of Lubbock, Texas passed away on October 5, 2021. Gary was born on July 1, 1961 in Cincinnati, Ohio to Paul and Florence Klein. He graduated from Abilene Cooper High School where he was a state champion gymnast. He joined the U.S. Air Force serving for thirteen years as a Weapons Load Crew Chief. Gary married the love of his life Lisa Van Nover in 1983. They had three children Tabitha Nelson, Jerrin Klein, and Joshua Klein. Gary was a simple man whose greatest joy in life was spending time with his family. His door was always open to those in need and was a dad to anyone in need of a father figure. He owned and ran his own computer business, 5 K Computers, for seventeen years. His customers weren't just customers, they were family. He worked hard everyday and used obstacles as a teachable/learning moment in life. He joined the Elks Lodge #1348 to help contribute to the good they do for children and disabled veterans; like himself. Gary was survived by his wife, Lisa Klein; Children, Tabitha Nelson, Jerrin Klein, Joshua Klein; Son in law, Justin Nelson; Daughter in law, Peggy Klein; Mother, Florence Klein; Grandchildren, Trysta, Gavyn, Pyper, Andrew, Lillian; Siblings, Paul Klein, Kathleen Pierce, Gregory Klein, Maria Parsons, Sister and Brother in laws, Angie and Shawn Krogstad, Theresa Pride Nieces and Nephews, Christopher, Kimiberly, Russel, Jenny, Stacie, Tricia, Beck, Michelle, Stephanie, Dylan, Lane, Madison, Kody, and Jordan; and Family Members, Kobie, Courtney, and their children Zoey and Trey. Mass of Christian Burial will be at 10:30 a.m., Friday, October 15, 2021 at St. Elizabeth's Catholic Church with Father Emiliano Zapata officiating. The Holy Rosary will be recited at 7:00 p.m., Thursday October 14th, 2021 at Sanders Memorial Chapel. In lieu of flowers, memorials are suggested to be given to the Veterans fund at the Elks Lodge #1348 3409 Milwaukee Avenue Lubbock, Texas 79407. * It is requested that you wear blue (his favorite color) and come in casual attire per his wishes. Also please write down a special memory you have with Gary and there will be envelopes to place them in for the family to read at a later time.

Gary Robert Klein, 60, of Lubbock, Texas passed away on October 5, 2021. Gary was born on July 1, 1961 in Cincinnati, Ohio to Paul and Florence Klein. He graduated from Abilene Cooper High School where he was a state champion gymnast. He joined... View Obituary & Service Information

The family of Gary Robert Klein created this Life Tributes page to make it easy to share your memories.

Gary Robert Klein, 60, of Lubbock, Texas passed away on October...

Send flowers to the Klein family.