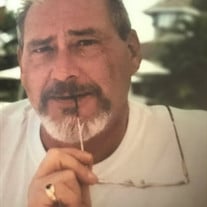 On Wednesday, Gary Carter Morrison, while surrounded by family and loved ones, passed from this life to the arms of his Lord and Savior Jesus Christ. Gary was born January 20, 1954, in Dodge City, Kansas. He was preceded in death by his parents Ernest and Sybil Morrison and two sons-in-law, Robin Griffin and Shawn Bailey. He is survived by his wife, Eustolia "Sam" Morrison to whom he was married for 21 years. He is mourned by his beautiful daughters, Cassie Griffin of Lubbock, and Altah Bailey of Slaton, and by his loving granddaughters, Allie and Olivia. He also leaves his stepchildren, who he loved dearly - Michael Moreno of Carlsbad, New Mexico, Jennifer and James Martinez of Fort Worth, and John Moreno of Fort Worth and by their children. Gary was a peace officer for the much of his adult life. He served as a peace officer and eventually a Police Chief at various municipalities throughout West Texas and the Oklahoma panhandle. Throughout the years he was an entrepreneur, a radio DJ, and a barber. He owned and operated Big Daddys Used Cars, worked at KFYO, 98 KOOL and other stations throughout the Lubbock area. Gary was the quintessential Lubbock man of the era. He was suave without being aloof. He was confident but never loud. In whatever enterprise Gary chose, he always had a soft heart for lost causes and he was an incredible friend to people who had no other friends. He dabbled in journalism and wrote a monthly column for the "Caprock Sun." Here, Gary was able to share his vast knowledge of country music and of music originating in Lubbock. He had a huge admiration for music generally and he was a fan and friend to Lubbock musicians specifically. Visitation for Gary Morrison is Sunday, May 15th, from 3-5 at Sanders Funeral Home and his funeral will be held on Monday, May 16th, at 2:00 pm at 12th Street Church of Christ in Shallowater, Texas.

On Wednesday, Gary Carter Morrison, while surrounded by family and loved ones, passed from this life to the arms of his Lord and Savior Jesus Christ. Gary was born January 20, 1954, in Dodge City, Kansas. He was preceded in death by his parents... View Obituary & Service Information

The family of Gary Carter Morrison created this Life Tributes page to make it easy to share your memories.

On Wednesday, Gary Carter Morrison, while surrounded by family...

Send flowers to the Morrison family.