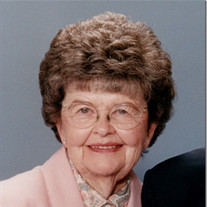 On the evening of December 5, 2020, at age 93, after supper and going to bed, Norma Grace Odom (known as "Grace") quietly slipped into eternity. She has now broken the bonds of progressive dementia which held her captive the last few years, and is forever rejoicing in the presence of God and her savior Jesus Christ. There will be a private family graveside service on Friday afternoon, December 11. We hope to have a larger memorial service in the spring or summer, when things are safer. She was born Norma Grace Reid on Sept. 11, 1927 in Lubbock. (After 2001, we could always remember her birthday). She was the daughter of two schoolteachers, J.W. and Myrtie Reid, and pursued the same career herself. The family loved the mountains. In the 1930s her parents built a vacation cabin near Tres Ritos, NM, between Taos and Santa Fe. They enjoyed hiking, skiing, and climbing some of the surrounding peaks, both on foot and horseback. We’re grateful that she learned many wildflower names from her mother and passed that on to future generations. As long as she was able, she loved quiet walks to enjoy the wildlife and the beauty of the mountains. While at Texas Tech she met a returned WWII serviceman who helped her with grocery shopping for a church function. After graduating, and teaching in Ralls, she and Vernon Odom started their 71-year life journey together on August 12, 1949. They honeymooned in that same mountain cabin, which still had no running water, and an outhouse up the hill. They settled in Lubbock (after a year in Shawnee, OK), attended the First Baptist Church, and taught in Lubbock schools. She left teaching to raise three Baby Boomers (all boys), and survived to tell about it. (The cabin also acquired indoor plumbing and a bathroom.) While Vernon took a work hiatus to earn a doctorate in education, she temporarily returned to teaching home economics at Carroll Thompson Jr. High. She also helped teach some of her sons about cooking, and even sewing. She used her training in home economics to develop a ministry to the less fortunate in Lubbock, part of her church's outreach. She also learned some Spanish to help in the effort. The day after the Lubbock tornado she obtained official permission to drive their 4WD into restricted hard-hit areas to check on "her ladies." (They were all OK.) Later, the family joined Trinity Church in Lubbock. Grace and Vernon taught Sunday School. They started to sense the need for a Christian bookstore that would carry a fuller line of merchandise. They opened Good News Book Store on 34th St. Grace ran it alone at first; later Vernon left his job and they ran it together. It grew to a major operation, especially after moving to 50th St. She eventually gave up skiing (after, she said, her kids went down the mountain twice while she went down only once), but her lifelong love of the mountains still took her and the family hiking on many occasions. Even after she was a grandmother, she ascended Jicarita Peak (the 3rd highest in New Mexico) with Vernon and other family members, including a grandson. The family remembers special things like her cheesecake, and making peanut brittle with her dad. In the late 1980s they sold the bookstore and "retired," spending time in the mountains, and traveling. One group trip took them to southernmost Mexico, to build a church. While there they were struck by the rather primitive medical care, and a conviction started that led to their building a free clinic in Cintalapa. It grew to a campus with several buildings. For about 20 years they traveled back and forth, taking donated equipment, supplies, and medicines there; and sponsoring campaigns where visiting doctors would perform cataract surgeries and other needed procedures. On a few occasions they were featured in the Lubbock paper -- especially the emergency during which a visiting surgeon reattached a boy's severed thumb, with online real-time guidance from a specialist in Lubbock. Both Grace and Vernon said this period was the most rewarding -- and important -- portion of their lives. During this period she was also a tireless caregiver for two of her elderly great-aunts and her father. In 2013 they moved to Carillon. Their 70th anniversary was a joyous occasion for their large extended family to get together. The family wishes to thank Carillon House, Kindred Hospice, and Texas Hospice for the loving care shown to our mom during her last years. Grace is survived by her husband Vernon Odom of Lubbock, sons Warren (Lubbock), with wife Tammy (Hicks), David (Elgin, TX), with wife Paula Smyth, and Milton (Tulsa, OK), with wife Barbie (Livingston), 7 grandchildren (Brandi Walker, Travis Odom, Shannon Ronit Odom, Jayme Ficken, Joseph Odom, Wesley Odom, Chad Odom), 3 step-grandchildren (Angela Dirickson, Sheila Mika, John Dirickson), 12 great-grandchildren, 6 step-great-grandchildren, and 4 step-great-great-grandchildren. In lieu of flowers, the family suggests memorials to the Alzheimer's Association (alz.org).

On the evening of December 5, 2020, at age 93, after supper and going to bed, Norma Grace Odom (known as "Grace") quietly slipped into eternity. She has now broken the bonds of progressive dementia which held her captive the last few years,... View Obituary & Service Information

The family of Grace Odom created this Life Tributes page to make it easy to share your memories.

Send flowers to the Odom family.