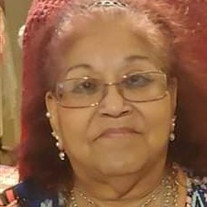 Guadalupe "Pina" Zarate-Cisneros departed peacefully from this life on September 30th, 2021. The devoted mother, sister, aunt, grandmother and great-grandmother was surrounded by family during her last hours on this earth. Guadalupe was born on March 1st, 1949, in Carrizo Springs, TX. She lived most of her adult life in the South Plains area, which included Matador, Turkey, Plainview, and then Lubbock, TX. She was deeply devoted to her Catholic faith. She was also an avid animal lover and passionate about her cats. She was adamant about cooking her traditional recipes for pumpkin pies and bunuelos on Thanksgiving and New Year's. These recipes were passed down to her by her preceding family. No matter what she was going through during the holidays, she had to make those recipes so that she could give them out to her family. Western movies and listening to Spanish music were her favorite things to do. We also can't forget about her novellas that she watched intensely throughout the day. She loved her family very much, and even just hearing their voices over the phone brightened up her day. Guadalupe is survived by her sister: Estella Calderoni; her four children: Ricardo "Richie" Hurtado Jr., Juliana "Julie" Cisneros, Alvaro "Alvie" Cisneros Jr. and Jose "Joe" Villagomez Jr. She also had 7 grandchildren and 17 great-grandchildren. Guadalupe was preceded in death by her mother, Angelita Tijerina Zarate, her father, Conrado Zarate Sr., her daughter Mary Hurtado, and 15 brothers and sisters. A viewing will be held at Sanders Funeral Home in Lubbock, TX on Thursday, October 7th beginning at 9am. A Rosary and visitation will also be held there the same evening starting at 6pm. The funeral service will be held at St. Patrick's Catholic Church, which is located on 1603 Cherry Avenue, Lubbock, TX, at 10am. Following the funeral service, she will be laid to rest at the City of Lubbock Cemetery.

Guadalupe "Pina" Zarate-Cisneros departed peacefully from this life on September 30th, 2021. The devoted mother, sister, aunt, grandmother and great-grandmother was surrounded by family during her last hours on this earth. Guadalupe was born... View Obituary & Service Information

The family of Guadalupe Zarate Cisneros created this Life Tributes page to make it easy to share your memories.

Send flowers to the Cisneros family.