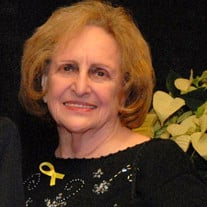 Helen Carolyn Delmar Smith, 83, of Lubbock, passed away on January 15, 2021. A memorial service will be held on February 13, 2021 at Sanders Memorial Chapel at 1:00PM. Live streaming will be available for those who would like to attend the service virtually. She will be interred at the Lubbock Cemetery in a private family service. Helen was born February 12, 1937 in Houston, TX. to Walter Alexander Delmar and Elizabeth Carolyn Fellman Delmar. She attended Stephen F. Austin High School in Houston, where she played bagpipe in the Scottish Brigade and graduated in 1955. Helen received a BS degree from Sam Houston State University in Huntsville. She continued her education and received master’s degrees from Texas Tech University and Sul Ross State University. Helen began teaching at Carrol Thompson Junior High in Lubbock, TX. and continued her career in education serving as teacher, counselor, and special education director in Lubbock ISD, Kermit ISD, and the East Plains Cooperative. After many years in education, Helen worked as a parole officer in Lubbock. Helen was a member of The Lubbock Women’s Club, Phi Delta Kappa, The Rebekahs, and the American Business Women’s Association (ABWA). She was also active in her Scottish Brigade and Austin High School Alumni groups. She volunteered time and resources to Lubbock Meals on Wheels, the Disabled American Veterans, and various other organizations. She enjoyed crafting, painting, traveling to the mountains in Colorado, and attending the Lubbock Symphony Orchestra. Helen was preceded in death by her parents and her infant daughter, Elizabeth Lynne Smith. She is survived by a daughter, Julie Smith and granddaughter, Kimberly Lee both of Spring TX; two brothers, William A. Delmar of Kingman, AZ and George F. Delmar (Carolyn) of Pleak, TX; a sister, Mary Crochet of Missouri City, TX; nieces Stephanie Crochet, Jennifer Stotko, and Katherine Alexander; nephews Grant Crochet, Jeffery Delmar, Jason Delmar, and Christopher Delmar; and great-nieces and nephews Megan Nevestich, Kyla Stotko, Kyle Crochet, and Clara and Christian Delmar. In lieu of flowers, the family requests that donations be made to Lubbock Meals on Wheels or the Disabled American Veterans.

Helen Carolyn Delmar Smith, 83, of Lubbock, passed away on January 15, 2021. A memorial service will be held on February 13, 2021 at Sanders Memorial Chapel at 1:00PM. Live streaming will be available for those who would like to attend the service... View Obituary & Service Information

The family of Helen Carolyn Delmar Smith created this Life Tributes page to make it easy to share your memories.

Helen Carolyn Delmar Smith, 83, of Lubbock, passed away on January...

Send flowers to the Smith family.