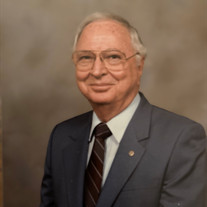 James Bryan Stinnett, Jr. (“J.B.”) passed away peacefully at home in Lubbock on Monday, November 16, 2020, at the age of 98. J.B. was born February 21, 1922, in Tell, Texas (Childress County), to Jewel Atkisson Stinnett and James Bryan Stinnett, Sr. J.B. grew up in Tell and was known to many as “Smiley.” After graduating from Tell High School, J.B. briefly attended Hardin-Simmons University in Abilene. The oldest of five siblings, J.B. left Hardin-Simmons to return home to Tell to help care for his mother and siblings and the family grocery business upon the sudden passing of his father. J.B. lived most of his life in Lubbock, Texas, where he owned and operated Stinnett Food Market for almost 50 years. Working until close to the age of 80, J.B. loved his customers and the community, and was affectionately known as “Chango.” J.B. was a man of deep and enduring faith in the Lord Jesus Christ, and faithfully served in many capacities in church throughout his adult life, most recently at Redbud Baptist Church. He was also proud to serve as a member of South Plains Lions Club for approximately 60 years, working diligently every year in charitable Lions Club fundraisers such as the annual rose sale and Christmas tree sales. J.B. thoroughly enjoyed weekly Lions Club Meetings, attending as often as he could even into his late nineties, and was honored with the Lions Club Honorary Lifetime Membership. J.B. was steady, honest, and devoted to his family. He loved to be around people, always greeting everyone with a smile. He loved to tell old humorous stories, or, discuss something he had read in the newspaper, which he read front to back every day. J.B. was preceded in death by his parents, a sister Rosemary Smith, and a brother Andrew Stinnett. J.B. is survived by his wife of 57 years, Dorothy, of Lubbock; daughter Pam Stinnett (Ginger) of Lubbock; son Bryan Steger (Martha) of Taos, New Mexico; son Ben Steger (Nylene) of Pahrump, Nevada; daughter Brenda Green of Lubbock; son Jimmy Stinnett (Shelly) of San Antonio; son Franklin Stinnett (Madee) of Claremore, Oklahoma; grandchildren Austin Green, Madison Stinnett, James Stinnett, Rachel Langford, Angelina Steger, and Tiffany Bonas; several great-grandchildren; brother Gene Stinnett of San Antonio; sister Gwen Caussey (Don) of Katy; and many cherished nieces and nephews. Visitation will be at Sanders Funeral Home in Lubbock on Sunday, November 22nd, from 5:00 PM to 6:30 PM. The family requests that visitors adhere to social distancing protocols and the wearing of facemasks. The funeral service will be held at Sanders Funeral Chapel in Lubbock at 1:00 PM Monday, November 23rd with Pastor Carlos Hinojos of Redbud Baptist Church officiating, with graveside service to follow at Resthaven Memorial Park. For those in attendance, the family requests adherence to social distancing protocols and the wearing of facemasks. Additionally, the service will be live streamed on the Sanders Funeral Home website, www.sandersfuneralhome.com. If you wish to honor J.B.’s memory with a donation in lieu of flowers, the family suggests donations to the Parkinson’s Foundation.

The family of J.B. Stinnett created this Life Tributes page to make it easy to share your memories.

Send flowers to the Stinnett family.