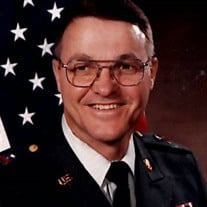 On Thursday, October 14, 2021 Jack Ray Ward passed away at Ussary-Roan Texas State Veterans Home. His loving wife and best friend, Janice, was with him by his bedside. Jack was born September 4, 1944 in Kennett, Missouri, to Curtis and Margie Ward (Hicks). Jack was the youngest of four children. Jack attended Columbia College in Columbia, Missouri and received an associate of Arts degree in 1975 and a BA in Individual Studies in 1978. In 1985 he attended US Army Sergeant Major Academy and achieved the Master Sergeant designation, in 1986 he received the Command Sergeant Major designation. Jack took great pride in his military career. He enlisted in the United States Army August 12, 1962. Jack served two combat tours in Vietnam, 1967-1968 and again in 1970-1971. Jack spent six years on recruiting duty in Milwaukee, Wisconsin and St Louis, Missouri. He was stationed in Europe for seven years and in El Paso, Texas at Fort Bliss for five years. Jack served in a variety of military occupations, Squad Leader, Platoon Leader, 1st Sergeant, and Sergeant Major at the Battalion level, Brigade level and Division level. He retired as Command Sergeant Major in 1991 after 29 years of active duty. His decorations include Bronze Star Metal, two Legion of Merit Medals, two Meritorious Service Medals, three Army Commendation Medals, and Army Achievement Medal, Vietnam Service Medal with three Bronze Star Medals, Republic of Vietnam Campaign Medal, and seven Good Conduct Medals. Jack met Janice Stein in Austin, Texas in 2004, they were married in 2005. They later moved the DFW metroplex and in 2016 moved to Lubbock, Texas. After retiring from the US Army, Jack had a fast moving career with Geico, and later RPI, traveling all over the United States helping dealerships with insurance and warranties. Jack served as deacon and business manager at Crossway Baptist Church from 2008-2016. Jack was the quintessential "Car Man" . He loved everything about them! He loved spontaneous road trips, driving all over the country with Janice and the "girls" Crissy (a schnauzer) and Ginger (a yorkie). Jack loved his puppies, he also had a black lab named Bubba that he would feed popcorn, and a standard poodle, Gracie who thought she was his lap dog. Jack was a lifetime member of the Lubbock VFW post 2466. He made many good friends playing an active role in the VFW. He also thoroughly enjoyed his "Market Street Geezers" coffee group whom he would meet every Monday morning at 9am sharp! Jack is survived by his wife Janice Ward (Stein) and his 2 children Steve Ward and Melissa "Missy" Garcia. Jack was preceded in death by his parents Curtis and Margie Ward, and his brothers Darrell Ward and Glen "Goose" Ward, and his sister Bonnie Dodson. A family viewing will be held Thursday, October 28th, from 10-11am at Sanders Funeral Home, 1420 Main St. Lubbock, TX 79401. A public visitation will be held Friday, October 29th, from 5-6:30pm with VFW military honors. A memorial service will be held on Wednesday, November 3rd at 2pm at Dallas Fort Worth National Cemetery, 2000 Mountain Creek Parkway, Dallas, Texas 75211. In lieu of flowers donations can be made the the VFW Post 2466. PO Box 3126, Lubbock, TX 79452-3126.

On Thursday, October 14, 2021 Jack Ray Ward passed away at Ussary-Roan Texas State Veterans Home. His loving wife and best friend, Janice, was with him by his bedside. Jack was born September 4, 1944 in Kennett, Missouri, to Curtis and Margie... View Obituary & Service Information

The family of Jack Ray Ward created this Life Tributes page to make it easy to share your memories.

Send flowers to the Ward family.