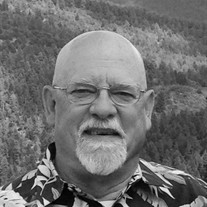 James Albert Grusendorf, 74, of Lubbock, passed away on Monday January 11. James was born in Reedsburg Wisconsin on April 19, 1946 to Albert and Betty Grusendorf. He was the oldest of 5 boys and spent his childhood in Wisconsin and later in Texas, first in Muleshoe and finally settling in Morton in 1963. There he met and married his high school sweetheart, Sherry Kay Lynch also of Morton. They moved to Lubbock in 1966 where they raised two children, Greg and Melissa. James worked at American Trailer and later Coastal Plains bearing service until 1986, when he and his partners formed Plains Bearing, Inc., an industrial parts distributor. He was a member of the Lubbock Industrial Lions Club. As a longtime industrial parts man, he was a walking encyclopedia of part numbers, sizes, ratios and dimensions. Vacation locations were determined by whether he would have phone access to the office and his customers. James was a parishioner at St. Elizabeth Catholic Church for over 40 years and served in ministries including the Parish Council, Marriage Preparation, C.C.E teacher, Eucharistic minister, Usher, and financial secretary for Knights of Columbus. James enjoyed driving and working on old cars and was a member of the Caprock Corvette Club, but always said his greatest joy in life were his children and grandchildren. James was a role model and leader for his and Sherry's immediate and extended families, helping and supporting both of their parents and siblings over the years. He was always there when anyone needed help and was a friend to everyone who met him. James was proceeded in death by his parents, brother Wayne, and his beloved daughter Melissa Grusendorf Canale. He is survived by Sherry; son Greg & daughter-in-law Melanie, grandsons Gus, Sam and Charlie Grusendorf of Bergheim; Son-in-law David Canale & wife Edie, grandson Ford Canale and granddaughter Ella Canale of Ransom Canyon; brother John Grusendorf & wife Sylvia of Spur; brother Gerald Grusendorf & wife Deletta of Frisco; brother Mike Grusendorf of Lubbock; sisters and brothers-in-law Nancy & Bill Cross of Cedar Creek, Betty & Gary Kernell of Lubbock, Wanda & Dusty Dupree of Lubbock, Mike & Julie Lynch of Austin, and numerous nieces and nephews and many treasured friends. There will be a memorial service at Sanders Funeral Home on Friday June 25th, 2021 at 7 PM with family receiving guests starting at 6:00. There will also be a memorial service Saturday June 26th at 10 AM at St. Elizabeths Catholic Church. In lieu of flowers, the family suggests memorial contributions to Catholic Charities of Lubbock, Scottish Rite Children's Hospital of Dallas, or Saint Elizabeth's University Parish Building Fund, 2305 Main Street, Lubbock, 79401.

James Albert Grusendorf, 74, of Lubbock, passed away on Monday January 11. James was born in Reedsburg Wisconsin on April 19, 1946 to Albert and Betty Grusendorf. He was the oldest of 5 boys and spent his childhood in Wisconsin and later in... View Obituary & Service Information

The family of James Albert Grusendorf created this Life Tributes page to make it easy to share your memories.

James Albert Grusendorf, 74, of Lubbock, passed away on Monday...

Send flowers to the Grusendorf family.