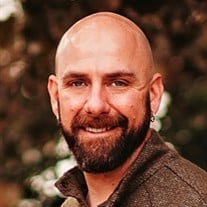 On Wednesday, July 15th, Jason Ty Dodson left his home here with us and walked into the loving arms of our Heavenly Father at the young age of 47. Jason was born in Abilene, Texas on September 11, 1972. He was raised in Lubbock, Texas by his parents Ron and Carol Dodson. Jason attended Coronado High School and spent some time at Texas Tech University before joining the United States Marine Corps on November 12, 1991. On December 9, 1995, Jason married Stephanie Dodson. In the coming years, Jason and Stephanie built an amazing life that included two precious children, Caitlyn and Carson. For 20 years Jason worked at Coca Cola and then transitioned into a position with Viva Distributing as a Market Sales Manager. During his time with Coca Cola and Viva Distributing, Jason formed incredible, lifelong friendships. He was a leader, a motivator, and a mentor to many. Jason was a passionate and committed family man. His support and love for his two children could be seen by all in the Lubbock community. Jason spent countless hours as his daughter’s catcher in the backyard of his home as she practiced her softball pitching. He would coach and mentor his son in his football and track passions and teach him to become a kind and respectable young man. He spent many years in the stands of various sporting events watching both of them and beaming with pride. If you wanted to see a genuine smile on his face you could simply say the names of his children. Jason was a loyal friend to many. He would drop everything to help someone in need. Jason was the funniest person you could meet and was always the life of the party. When speaking to his friends they would say that there was rarely a time when he was not smiling and laughing. You could count on him to make any situation the most fun. The family would like to personally thank the Emergency Medical Technicians and the staff at Covenant Emergency room for providing outstanding care and compassion. Jason is preceded in death by his mother Carol Dodson. He leaves behind his father, Ron Dodson; his wife, Stephanie Dodson, children Caitlyn (fiancé Tycer Farmer) and Carson Dodson brothers Scott Dodson (wife Amanda) and Dwayne Larramore (wife Athena); uncles Benny Dodson and Phil Dodson (wife Lisa) and Aunt Sandra Ford (husband Lee) He is also survived by many cousins, nephews and nieces. If donations in Jason’s name are desired the family requests they be given to the Rubinstein-Taybi Syndrome Childrens Foundation in honor of Gunner Johns. https://www.paypal.com/cgi-bin/webscr?cmd=_s-xclick&hosted_button_id=K64HSVFWXEMSU The family will accept visitors at Sanders Funeral Home on Wednesday, July 22nd from 6:00pm to 8:00pm. Funeral services will be held at First Christian Church at 10:30am on Thursday, July 23rd followed by graveside services at Peaceful Gardens.

On Wednesday, July 15th, Jason Ty Dodson left his home here with us and walked into the loving arms of our Heavenly Father at the young age of 47. Jason was born in Abilene, Texas on September 11, 1972. He was raised in Lubbock, Texas by his... View Obituary & Service Information

The family of Jason Ty Dodson created this Life Tributes page to make it easy to share your memories.

Send flowers to the Dodson family.