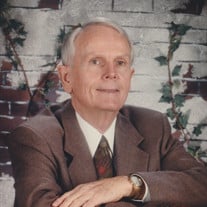 Jerry Louis Caddel, of Lubbock, TX, passed away on November 11, 2021. Jerry Louis Caddel was born July 30, 1934 in Mangum, Oklahoma to Louis Gaston (Jack) Caddel and Audie Thompson Caddel. He was happy to be the older brother to Bob. After graduating from Mangum High School, he attended Southwestern Oklahoma State University in Weatherford, Oklahoma, where he graduated with a Bachelor of Arts in Education and a Masters in Teaching. He was married to Kay Wildman on October 6, 1956 in Alfalfa, Oklahoma. He taught Instrumental Music in Boise City and Mountain View, Oklahoma. After moving to Lubbock, Texas, they had one son, Christopher Louis Caddel. While at Southwestern, he was the lead trumpet player of the marching, concert, and jazz bands. He served as Vice President of the band and was honored to play a solo for both commencement and graduation ceremonies. Jerry was a member of the Beta Tau Beta Fraternity also known as the 'bow-tie-boys'. In 1965, Jerry began a career as a 6th Grade teacher and Elementary School Counselor with the Lubbock Independent School District. After retiring in 1999, he continued to work part-time for both LISD and Texas Tech University as a Professional Educational Diagnostician. When he retired from part-time work in June of 2016, he had served in education for over 60 years. He especially loved working with Principal Oscar Reyes and the students of the LISD Juvenile Justice Alternative Education Program. Jerry was a member of the Agape, Wolfforth, St. John's, and New Deal United Methodist Churches. He served as President for the Lubbock Classroom Teachers Association, Member of the West Texas Counseling Association, and was awarded the West Texas Counselor of the Year, twice. He was very proud to be appointed and serve on the Texas Governor's Commission on Ethics and was a Charter Member of the Ranch Headquarters Association (now called the Ranching Heritage Association). Jerry loved dancing! He and Kay were President(s) of the Terpsichorean Dance Club and always loved dancing to the music of the Roy Roberts Band, Jazz Alley, and Wolf Creek. When he attended counselor's conventions, all the ladies wanted to dance with him. If Kay was along, she was lucky to make the dance card! In his spare time, Jerry raised, trained and showed Quarter Horses with Chris. Jerry and Kay were leaders of the Pioneer Horse Club for the Lubbock County 4-H for ten years and helped the 4-H'ers participate in county, district, and state competitions, and coached Chris and Robin Bassinger of Slaton to a National Western 4-H Horse Championship. He was preceded in death by his parents and brother Bob. He is survived by wife Kay, son Chris, grandchildren Jackson Louis, Hank Maxwell, and Truly Belle Caddel of Lubbock, sister and brother-in-law Hubert and Kara Lee Bean of Moore, Oklahoma, and sister-in-law, Mary Caddel and niece Jackie Hood of Kingsland, Texas, and many more cousins, nieces, nephews, and host of friends. The visitation will be at Sanders Funeral Home on Thursday, November 18, 2021 from 5:00 PM to 7:00 PM. Funeral services will be held on Friday, November 19, 2021 at 2 PM in the Sanders Memorial Chapel, located at 1420 Main Street. A graveside service will be at 2:00 PM on Saturday, November 20, 2021 at Alfalfa Cemetery in Alfalfa, OK. The family would like to thank Rex Caldwell and Bob Albin for making sure Jerry's bird feeder was always full during his stay at Wilshire Senior Living. Also, thanks go to the staff of Wilshire and Nurse Stephanie Soto of Texas Home Health Hospice. Donations can be made to the New Deal United Methodist Church.

Jerry Louis Caddel, of Lubbock, TX, passed away on November 11, 2021. Jerry Louis Caddel was born July 30, 1934 in Mangum, Oklahoma to Louis Gaston (Jack) Caddel and Audie Thompson Caddel. He was happy to be the older brother to Bob. After... View Obituary & Service Information

The family of Jerry Louis Caddel created this Life Tributes page to make it easy to share your memories.

Jerry Louis Caddel, of Lubbock, TX, passed away on November 11,...

Send flowers to the Caddel family.