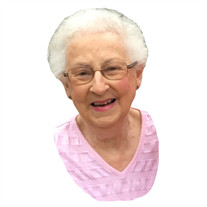 Jessie Mae "Jeri" Henderson Boyles was a caring wife, mother, grandmother, great grandmother, sister, and friend. She left this world suddenly on June 27, 2021, at the age of 89, to go to her heavenly home. She was born to Claude & Lottie Henderson on February 4, 1932, in Happy, TX. She went to school in Ballinger and moved to Eldorado her senior year of high school. After graduating from high school, Jeri married her late husband, Bill Oglesby Sr., in 1950. Together, they had four sons: Bill Jr., John, Tom, and Richard. Jeri is preceded in death by her late husband, Bill Oglesby Sr. in 1963, and her son, John Oglesby in 2016. Jeri moved to San Angelo in 1963 and married her husband, Richard Boyles, in 1965. Together they had one daughter, Amy. In 1979, they moved to Abernathy. They retired to Cloudcroft, New Mexico in 1998. They later returned to their home State of Texas and have resided in Lubbock since 2016, which allowed them to be closer to family and enjoy so many special moments and milestones. Jeri and Richard have lived countless places over the years, but one thing remains true, every neighbor became family as they would gather around listening to Jeri's stories. The simplest pleasures in life brought great joy to Jeri. She and Richard were skilled square dancers for many years and filled their time with laughter and love spinning around the dance floor. During their time in Cloudcroft, Jeri and Richard could be found enjoying the outdoors collecting pinecones, riding four-wheelers, sledding with grandchildren at White Sands or cuddled up by their rock firepit. Jeri, who is known to many as "Gammy", loved spending time sewing and her legacy will live on as children gather around Christmas morning with tree skirts and aprons sewn by her beautiful hands. She baked delicious treats for her family and friends and loved an evening playing Joker. Many of her years were spent volunteering and serving those in need, locally and afar. She had a true servant's heart, and she never forgot the power of whom she served. She spent her life in the presence of God and as she took her last breath on earth, he welcomed her home. Jeri is survived by her loving husband of 56 years, Richard Boyles; son Bill and his wife Sally of Midland; son Tom and his wife Peggy of Odessa; son Richard and his wife Lawanda of Aledo; daughter Amy and her husband Chris of Kingston, GA; 12 grandchildren; 23 great grandchildren; as well as numerous other extended family members and friends. A Celebration of Life service will be held on Wednesday, June 30, 2021, at 2:00pm at South Park Baptist Church, where they are dedicated members. The family will receive friends at their home 4426 A 75th Drive Lubbock, TX 79424.

Jessie Mae "Jeri" Henderson Boyles was a caring wife, mother, grandmother, great grandmother, sister, and friend. She left this world suddenly on June 27, 2021, at the age of 89, to go to her heavenly home. She was born to Claude & Lottie... View Obituary & Service Information

The family of Jessie Boyles created this Life Tributes page to make it easy to share your memories.

Send flowers to the Boyles family.