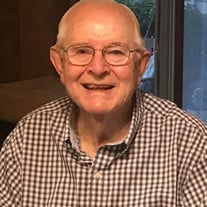 Jim R. Shearer, 86, of Lubbock, Texas went home to his Lord September 8, 2021. He was born December 14, 1934 in Odell, TX to Walter and Lucille Shearer. He grew up on a farm near Plainview and was a graduate of Plainview High School and Texas Tech University. He served in the Army Reserves, worked in city government, mortgage banking, and the non-profit sector. He married the love of his life, Lynne Porter, on August 6, 1960 in Lamesa. The next seventeen years would take them to a few small West Texas towns, a short stop in Lawton, Ok, and almost a decade in Texarkana, TX. It was a short stint in Colorado Springs that led Jim and Lynne back home to West Texas and Lubbock to be near family and enjoy the "most beautiful sunsets in the world." Jim and Lynne rooted their family in Lubbock where they resided for 42 years. He spent hundreds of hours coaching sports teams for his three kids and serving as their greatest fan. Jim had a life-long passion for western culture and was a past president of the Cowboy Symposium and received the American Cowboy Culture Award in 2004. He was passionate about Lubbock and Texas Tech. He was part of the team that began the Fourth on Broadway Celebration in downtown Lubbock. He also worked to stimulate the revitalization of downtown through his work with the non-profit, Center Corp. Jim was a member of Monterey Church of Christ where he served as an elder, deacon and Bible class teacher - having taught since high school. Jim was a quiet man with a wry sense of humor and silly side that he would share with those he knew well and loved. He enjoyed hunting, riding horses, sizing up livestock, and spending time with friends as a long-time member of the "Wisdom Club," a group of friends who met weekly at the United coffee shop. Loved ones include wife Lynne Shearer; son Jim Shearer (Rachel); daughter Susanne Malins (Tyler); son John Shearer (Melissa); sister, Patsy Stapleton; grandchildren, John T., Amanda, Nicholas, Macy, Rush, Corey and Urijah, and great grandchild, Alexander. Preceded in death by his parents and his niece, Diane Stapleton. Memorials are suggested to Academy 4 (www.academy4.org). A celebration of his life will be 10:00 a.m., Monday, September 13, 2021 at Monterey Church of Christ with Barry Stephens officiating. Graveside services will follow in Plainview Memorial Park. His family will receive friends on Sunday, September 12, 2021 from 3:00-4:30 p.m. at Sanders Funeral Home. Please celebrate the life of Jim by visiting www.sandersfuneralhome.com.

Jim R. Shearer, 86, of Lubbock, Texas went home to his Lord September 8, 2021. He was born December 14, 1934 in Odell, TX to Walter and Lucille Shearer. He grew up on a farm near Plainview and was a graduate of Plainview High School and... View Obituary & Service Information

The family of Jim R. Shearer created this Life Tributes page to make it easy to share your memories.

Send flowers to the Shearer family.