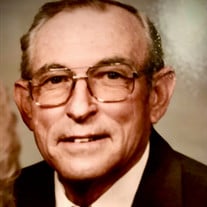 Joe Bob Yates Sr. passed peacefully into the waiting arms of his Lord on Monday, November 2nd after a valiant battle with Covid19. Joe Bob was born in Forney, Texas on January 8th, 1930 to Della Birchfield Yates and Hugh Hudgins Yates. He served in the US Army before moving to Lubbock in the late 40’s and in 1950 he met and married the love of his life, Billie Edith Webb Yates. He called her “Dee Dee” and has missed her so much since her passing soon after they had celebrated their 61st wedding anniversary in 2011. Not only was Joe Bob a farmer and cattle rancher, he was also a remodeler, a landlord the owner of several dry cleaning establishments, including Family Dry Cleaners and co owner of Steamex of Lubbock. Somewhere along the way he managed to find time for countless memorable family trips to Lake Brownwood and Ruidoso, New Mexico. Joe Bob never met a stranger and never missed an opportunity to help someone in need. He was an avid bridge and domino player, a smooth dancer and gifted singer and no matter where he was or what he was doing his contagious laughter and talent for story telling always made him the center of attention. Among those waiting with open arms for his glorious arrival are his beloved DeeDee, his brother Bill Yates, his sister, Joy Yates Webber, his parents Della and Hugh Yates and his Grandmother, Minnie Yates. Survivors include his children, Bobby Yates and wife Becky, Jana Yates Stout and husband Roy and Lori Yates Ferguson all of Lubbock and a brother Jerry Yates and wife Vivian of Dallas, Texas. He will be missed as well by many nieces and nephews and friends who also called him “Uncle” Joe Bob. Joe Bob was known as ‘ToDo’ by his 7 adoring grandchildren, Neely Yates Rawe, Joey Yates, Lindsey Yates Hinson, Roy Stout, Robbie Stout, Shelby Stout Owens and Chandler Ferguson and 10 great grand children who will miss his sing-alongs on his porch swing and the tall tales at his kitchen table. A private graveside service will be held for family members only on Wednesday, November 11th. Officiating will be Joe Bob’s nephew, Pastor Jackie White. in lieu of flowers the family suggest donations to be made in memory of Joe Bob Yates Sr. to Meals on Wheels at: 2304-34th Street, Lubbock, TX. 79411 or online at www.mealsonwheels.org. Or to the charity of your choice. Memories and condolences can be shared at www.SandersFuneralHome.com.

Joe Bob Yates Sr. passed peacefully into the waiting arms of his Lord on Monday, November 2nd after a valiant battle with Covid19. Joe Bob was born in Forney, Texas on January 8th, 1930 to Della Birchfield Yates and Hugh Hudgins Yates. He... View Obituary & Service Information

The family of Joe Bob Yates created this Life Tributes page to make it easy to share your memories.

Send flowers to the Yates family.