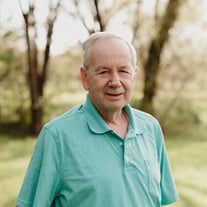 A celebration of life for John Francis Healy, 80, of Lubbock, Texas will be a Funeral Mass at 10:00 am, Monday, May 16, 2022 at Holy Spirit Catholic Church, Lubbock, Texas. Burial will follow at Resthaven Cemetery in Lubbock, Texas. His family will receive friends from 5:00-6:30 p.m. at Sanders Funeral Home on Sunday, May 15, 2022. John passed away May 10, 2022. He was born March 22, 1942 in Chicago, Illinois to John F. and Eileen M. Healy. John met Elaine Welborn on a blind date in 1967 while he was stationed at Fort Leonard Wood in Missouri. They were married on 9/21/1968 in St. Louis, Mo. While serving in the Army as a First Lieutenant, Artillery, John was awarded an Army Commendation Medal for meritorious services. As officer in charge, he instructed hand to hand combat training and was instrumental in implementing several new training sites. After being honorably discharged from the army, he began working for Kimberly Clark Corporation. He worked for Kimberly Clark for thirty years as a salesman, district manager and trainer. Over the span of their marriage, John and Elaine lived in three different states and many different cities. He remained an avid Chicago sports fan supporting the Whitesox, Bears, Bulls and Blackhawks over the years. After retiring from Kimberly Clark, John went back to work for Lubbock ISD at Monterey High School as a temporary substitute which turned into a permanent position where he made a lasting impression on both staff and students. He was actively involved in his parish over the years serving as lead usher at Holy Spirit Catholic Church. He was also a member of the Lubbock Serra club as well as the Knights of Columbus. He is survived by daughter Kristin and Erick Willcoxon of Lubbock, Texas; daughter Kerry and Everett Stamps of Lubbock, Texas; son Tim and Laura Healy of Lubbock, Texas, his 7 grandchildren; Aidan, Caroline, Cooper, Hunter, Taylor, Gracie and Grant; He is preceded in death by his parents, John F. and Eileen M. Healy, brother Patrick Healy, sister Francine Mulligan and his loving wife of fifty years, Elaine Healy.

A celebration of life for John Francis Healy, 80, of Lubbock, Texas will be a Funeral Mass at 10:00 am, Monday, May 16, 2022 at Holy Spirit Catholic Church, Lubbock, Texas. Burial will follow at Resthaven Cemetery in Lubbock, Texas. His family... View Obituary & Service Information

The family of John Francis Healy created this Life Tributes page to make it easy to share your memories.

A celebration of life for John Francis Healy, 80, of Lubbock,...

Send flowers to the Healy family.