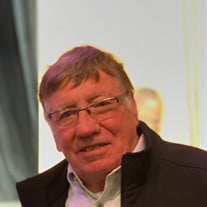 It is with great sadness that the family of John Henry Klein announces his passing after a brief illness, on Monday, March 16, at 74 years of age. Left to cherish his memory is the love of his life, Anne Horne Klein. Joining her in loving remembrance are their sons Todd Ray Klein and his wife Manda and John Thomas Klein and his wife Lyndee. Also left to honor his name is the joy of his life, his grandson, John Francis Klein. John Henry Klein was born on June 5, 1945 in Tucson, Arizona to Billy Jack and Agnes Marie Klein. He was the second of seven children and was preceded in death by his parents and sister, Mary Celine Rice, sister in law, Lisa Klein and brother in law Tom Horne. He will forever be remembered by his remaining five brothers and their families. Joe, Mike and wife Donna, Tommy and wife Karen, Eddie and wife Nancy, and Danny and wife Lisa. He is also survived by his brothers in law, Danny Rice, Francis Horne and wife Linda and sister in law Billie Horne. Also enduring this tragic loss is his best friend, Larry Griggs and wife Bettye. A member of a large family, John also leaves behind cousins in Kentucky and numerous nieces, nephews and great nieces and nephews. For those who knew John, he was rarely without his soulmate Anne. They were a pair that simply went together. John and Anne. John never wanted to be without her, and he fought as hard as he could to stay. As a devout Christian, John knew he and Anne would be reunited again, so he went peacefully with his family by his side. It was befitting that John entered heaven’s gates on 3:16. John was a member of Westmont Christian Church, where he served as a communion minister. If you needed a scripture to define John and the life he lived, it is 1 Corinthians 13:4-8 Replacing the word love with John, it reads: John is patient, John is kind. John does not envy, he does not boast, he is not proud. John does not dishonor others, he is not self-seeking, he is not easily angered, John keeps no record of wrongs. John does not delight in evil but rejoices with the truth. John always protects, always trusts, always hopes, always perseveres. That was John Klein. John graduated from Lubbock High in 1964 and immediately went to work at Griggs Carpet with his best friend Larry. For over 55 years, he was dedicated to his job. His customers knew his kindness. John attended Texas Tech and was a huge Texas Tech sports fan, regularly attending football, basketball and baseball games with his family. He threw great superbowl parties that will never be the same again. John loved doing anything Anne wanted to do, which often included playing spades, driving to garage sales, going to the movies and the Cactus Theatre. And he loved “Bro Night”, which was a weekly event that gathered his brothers and sisters in law. He loved playing cards and poker or left, right, center after family meals. He grilled outside during the summers and always managed to grow any plant he wanted. He was a great pumpkin carver, Christmas tree decorator, Easter egg dyer, pine wood derby car builder and Fourth of July backyard fireworks master. He was a front row seat keeper of anything John Francis did. At the end of the day, John simply loved being with his family and loving his family through his actions and deeds. We have so many great memories of his selfless love. Services are under the direction of Sanders Funeral Home where visitation will take place on Thursday, March 19th at 5:30 pm to 6:45 pm with services to take place on Friday, March 20th at Sanders Funeral Home at 2:00 p.m. and a graveside burial to follow at Resthaven Memorial Gardens. Serving as pallbearers are nephews Jonathan Klein, Jeremy Klein, Micheal Klein, Daniel Klein, David Klein, Mike Klein, Jr., Andrew Mitchell, Marshall Klein, Alex Rice and Quint Johnson. Serving as Honorary pallbearer is grandson, John Francis Klein.

It is with great sadness that the family of John Henry Klein announces his passing after a brief illness, on Monday, March 16, at 74 years of age. Left to cherish his memory is the love of his life, Anne Horne Klein. Joining her in loving... View Obituary & Service Information

The family of John Henry Klein created this Life Tributes page to make it easy to share your memories.

It is with great sadness that the family of John Henry Klein...

Send flowers to the Klein family.