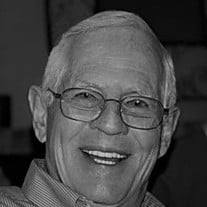 John Wallace McKee went to be with the Lord on April 21, 2021 at the age of 92. John Wallace McKee Jr. was born in Eastland, Texas, the only child of John Wallace McKee Sr. and George Ella Mickle McKee. The family moved to Amarillo, then to Lubbock where Wallace graduated from Lubbock High in 1946. Wallace earned a degree in Chemical Engineering from Texas Technological College. He served in the National Guard, achieving rank of Staff Sargent. He married Betty Loys Tubbs 6/24/1949, whom he met in Sunday school at the First Methodist Church. Wallace worked as a chemical engineer for Pittsburg Plate Glass in Corpus Christi, Charleston, WV, and New Martinsville, WV. Wallace then became head of the Production Planning Department at Geigy Chemical, in Mobile, AL. Wallace retired at the age of 58 and continued consulting for Ciba Geigy. Wallace was a talented carpenter and wood turner, winning several awards at local juried art shows . One of his pieces is on permanent display at the Mobile Museum of Art. Wallace was also very active at Overlook Presbyterian Church in Mobile, AL, where he served as Elder, Clerk of Session, Moderator of the Presbytery of South Alabama and taught Sunday School for many years. Wallace volunteered with an adult literacy program in Mobile, teaching adults with learning disabilities to read. Wallace and Betty had two children, Susan Loys and John Jeffery and were married for 53 years. Betty died of cancer in 2003. Wallace was always close to Betty's family and became reacquainted with Betty's first cousin, Sara Tubbs Stalcup, from Lubbock, TX. In 2006, at the age of 78, Wallace was blessed to marry the second love of his life and moved back to Lubbock. Wallace and Sara were very active in the Lubbock Lions Club and Westerners Club. They were also avid supporters of the Lady Raiders Basketball Team. Additionally, Wallace was a member of the South Plains Woodturners club and a regular bridge player. Wallace and Sara traveled, cooked, hosted parties and shared their love and time with many people in the community. He even found a way to help a student who was struggling in college math, by accompanying her to class and tutoring her for three years. Wallace was delighted when she got her degree. Wallace's memory will be cherished by his wife, Sara Tubbs Stalcup McKee of Lubbock, TX; his daughter Susan Loys McKee Barfield, along with her husband Marshall Barfield of Mobile AL; his son, John Jeffrey McKee, along with his wife Pam McKee of Calera, AL; his stepchildren, Kara Leslie of Waco, TX, Dana Jacobs along, with her husband Terry Jacobs of Boca Raton, FL, and David Stalcup of Lubbock, TX; his four grandchildren, Amanda Barfield of Mobile, AL, Katie Barfield of Daphne, AL, Dustin McKee of Montgomery, AL, and Landon McKee, along with his wife Rebekah McKee of Calera AL; his four step-grandchildren, Kirby Jacobs, of Boca Raton, Blair, Jake and Kris Wischmeyer of Lubbock, TX; and his four great-grandchildren, Graham, Caleb, Isaac, and Mack McKee of Calera, AL. Wallace's life will be celebrated on Monday, June 7, 2021 at 12:00 pm at Westminster Presbyterian Church in Lubbock, TX. Before the celebration service a committal service will be held at 10:00 a.m. at the City of Lubbock Cemetery. The family will receive friends on Sunday, June 6, 2021 at Sanders Funeral Home from 5:00 pm - 6:30 pm. In leu of flowers please make donations to: Westminster Presbyterian Church 3321 33rd St. Lubbock, TX 79410 806.799.3621 https://www.wpclubbock.org/give Lubbock Lions Club 2526 82nd Street, Suite D Lubbock, Texas 79423 806.763.4789 https://lubbocklions.org/ Lubbock Meals on Wheels 2304 34th Street Lubbock, Texas 79411 806.792.7971 https://lubbockmealsonwheels.org

The family of John Wallace McKee, Jr. created this Life Tributes page to make it easy to share your memories.