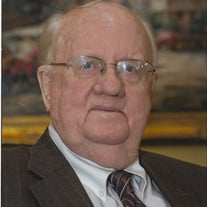 John Elzie Simpson, Jr. passed away on August 30, 2020. He was born April 27, 1923 in Moultrie, Georgia. He was the first son born to John Elzie Simpson, Sr. and Daisy Kendall Simpson. He was raised in Albany, Georgia where his father was a successful barber and businessman. He graduated from Albany High Scholl and attended Georgia Southwestern College in Americus, Georgia where one of classmates was Jimmy Carter. He was a member of the United States Army Signal Corps from 1943 to 1945, stationed on Tinian and Saipan Islands. He had frequent encounters with the Enola Gay and its crew. He watched the Enola Gay take off on August 6, 1945 not knowing the weapons it was carrying. Although he was in the Army for two- and one-half years, he never fired a shot. He returned to Albany and began work at the First State Bank of Albany. Soon thereafter he was hired by Lance, Incorporated, a snack food company, and moved to Tifton, Georgia. He married Jim Mae Swann on March 7, 1948. He worked for Lance until 1986 when he retired from the company after serving in Tifton, Georgia, Athens, Georgia, and Houston, Texas where he was the district sales manager. John and his wife, known by friends as Johnny and Jimmie, moved to Lubbock, Texas on July 1, 1988. He lived in Lubbock until his death. He was a member of the First Baptist Church where he was treasurer of his Sunday school class. He and Jimmie were avid golfers and were members of Lubbock Country Club. In 2004 he shot his age, twice. He worked at Splawn Simpson Pitts from 1991 until 2011 when he was forced to retire due to poor eyesight. He was dubbed “Big Daddy” or “Big” by the staff. Once when asked what his job duties were, he replied, “Not much.” He was in charge of the mail, banking, delivery, and giving advice, solicited or not. He was preceded in death by his parents. His spouse died in 2015. He is survived by two brothers, James M. Simpson of Huntington Beach, California and Richard Kendall Simpson of Santa Fe, New Mexico. He is also survived by two children, John Simpson of Lubbock and Dixie Simpson Cook of Allen, Texas. He is also survived by five grandchildren, Corey Simpson Booker of Richmond, Virginia, Kendall Simpson of Dallas, Texas, Becky Cook Leach of Allen, Texas, Cameron Cook of Benbrook, Texas, Katie Cook Cockerham of Plano, Texas, and ten great grandchildren. He enjoyed playing golf, watching golf on television, following college sports, piddling in the yard and the garage, painting projects, watching his grandchildren grow up, attending church and Sunday school, entertaining others with funny stories, and napping. The family wishes to thank all of his physicians and healthcare providers including James Grattan, Brad Snodgrass, Michael Robertson, Lora at Southwest Diagnostic Clinic, and the staff at the Phoenix House, now the Callander House, for their amazing and wonderful care provided to Mr. Simpson during the last years of this life. There will be a visitation at 5:00PM on Friday, September 11, 2020 at Sanders Funeral Home. Funeral services will be at 2:00PM, Saturday, September 12, 2020 in Sanders Memorial Chapel. You can share memorials to John's tribute page at www.sandersfuneralhome.com.

John Elzie Simpson, Jr. passed away on August 30, 2020. He was born April 27, 1923 in Moultrie, Georgia. He was the first son born to John Elzie Simpson, Sr. and Daisy Kendall Simpson. He was raised in Albany, Georgia where his father was a... View Obituary & Service Information

The family of John Elzie Simpson, Jr. created this Life Tributes page to make it easy to share your memories.

Send flowers to the Simpson family.