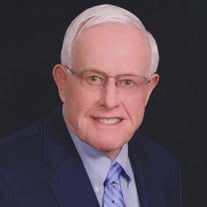 John Gordon Wilkerson, Jr., loving husband, father and grandfather, died August 28, 2021 after a courageous battle with cancer. John faced cancer the same way he lived life-with determination, steadfastness and gratitude. In life's great victories and its most difficult challenges, John's character, integrity, initiative, compassion and strong faith in God led him well. John was born in Lubbock, TX on December 18, 1934. A lifelong Lubbock resident, John graduated from Lubbock High in 1953 and from Baylor University in 1957. John assumed leadership of Wilkerson Cold Storage Co. in 1956 and remained Chairman of the company until his death. John married Ruth Collins on June 21, 1958. In a lifetime of good decisions, this was his wisest. They spent the next 63 years together in Lubbock, where their family grew to include four children and they were actively involved in serving their church, schools and community. A deacon at First Baptist Church, John taught Sunday School and was President of Men's Brotherhood. He worked on numerous church committees and served as Assistant Scoutmaster for Troop 9. Ruth and John were gracious in sharing their home with others in countless fellowships. Baylor University made it possible for John to complete his degree via correspondence courses and graduate with his class while he worked in Lubbock following his father's unexpected death in a plane crash. This forged a lifelong love for and loyalty to Baylor. He served 18 years as a Regent including two as Chairman of the Board. He was President of the Hankamer School of Business Alumni Board of Directors, a Director of the Baylor Alumni Association and Chairman of Baylor's Development Council. John was a proud citizen of Lubbock, and he had a significant role in the growth it achieved in his lifetime. He served as Chairman of the Board of City Development, the Lubbock County Appraisal District and the Civil Service Commission. He took an active role in local, state and national political races. He spent substantial time and resources in efforts to secure a promising future for the area he loved. Under John's leadership, Wilkerson Storage Co. and Wilkerson Properties grew to serve a broad array of commercial and industrial logistics and real estate customers. John served as a member of the board of the International Association of Refrigerated Warehouses. John knew his limitations and valued the chance to work with others whose diverse talents melded with his business acumen to achieve success. John was especially grateful to each member of the Wilkerson Storage Co. team, and he always valued their diligence, professionalism and can-do attitudes. John had a true heart for helping others. He had a unique ability to reach downtrodden and overlooked individuals, quietly offering inclusion, advice and material resources. John spoke truth clearly. He possessed both the compassion and firmness necessary to help persons in extremely difficult circumstances. Above all else, John was devoted to his family. He instilled in them the value and rewards of hard work, a heart for service, wisdom and comfort in dealing with hardships and loss and profound gratitude for the Lord's blessings. He especially enjoyed the company of his grandchildren. He played a mean game of 42 and was often a preferred partner. John was predeceased by his parents John Gordon Wilkerson and Cleo Hankins Wilkerson Bullard, his brother Howard, his son Ray and his granddaughter Meredith. Survivors include his wife Ruth; his sister Mary Grady and husband Bill; his sister-in-law Glenda Wilkerson; his son Gordon and wife Lori; his son David and wife Kim; his daughter Sarah Scott and husband Richard; his seven grandchildren: Will Wilkerson and wife Carolyn; Rachel Wilkerson and husband Jon Harrison; Warner Scott; Ellen Wilkerson; Ethan Scott and wife Ashlee; Caroline Wilkerson; and Julia Scott; his two great-grandchildren: Calvin Harrison and Charlotte Wilkerson. John's family is especially grateful for the exceptional care he received from his team of caregivers, nurses and physicians. The family will receive visitors Tuesday evening August 31, 2021 from 5:00 p.m. to 6:30 p.m. at Sanders Funeral Home. Funeral services will be at 3:30 p.m. Wednesday, September 1, 2021 at First Baptist Church. Memorials for John may be sent to: Ray Hankins Wilkerson Endowed Scholarship Fund, Baylor University, One Bear Place #97050, Waco, TX 76798, Memo: Wilkerson HSB ESF # 434SFNE.

The family of John Gordon Wilkerson, Jr. created this Life Tributes page to make it easy to share your memories.

Send flowers to the Wilkerson family.